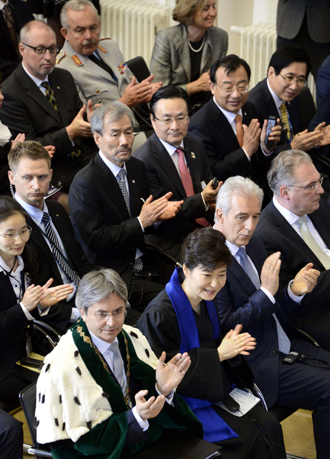 DRESDEN, Germany - President Park Geun-hye made a flurry of breakthrough proposals in a much-anticipated speech here Friday morning, which included joint economic development projects, the creation of the Northeast Asia Development Bank and cultural and educational exchanges with North Korea as a step toward the peaceful unification of the Korean Peninsula.

In the address, a follow-up to her announcement earlier this year that unification would be a “bonanza,” she presented three umbrella agendas to lay the foundation for peaceful unification with the North: humanity, co-prosperity and integration.

The 20-minute speech, widely predicted to become the president’s groundbreaking “Dresden declaration,” was delivered immediately after she received an honorary doctorate in politics and law from the Dresden University of Technology, one of the most prestigious schools in Germany.

The president emphasized the need for both Koreas to recover a sense of common identity over the course of preparing for the process of unification and integration.

“In my view, Germany was able to overcome the after-shocks of unification fairly quickly and achieve the level of integration we see today because of the sustained people-to-people interaction that took place prior to unification,” she said. “Now more than ever, South and North Korea must broaden their exchanges and cooperation. What we need are not one-off or promotional events, but the kind of interaction and cooperation that enables ordinary South Koreans and North Koreans to recover a sense of common identity as they help each other out.”

In regard to her agenda for co-prosperity, she proposed the building of infrastructure that would support the public’s livelihood.

“To help make life less uncomfortable for ordinary North Koreans, Korea could invest in infrastructure-building projects where possible, such as in transportation and telecommunication,” she said. “Should North Korea allow South Korea to develop its natural resources, the benefits would accrue on both sides of the peninsula.”

Her proposals include setting up multi-farming complexes that support agriculture, livestock and forestry in areas in the North under threat from backward production and deforestation.

As a preparatory step toward integration, narrowing the distance between our values and our thinking is crucial, the president continued.

“As division persists year after year, the language, culture and living habits of the two sides continue to diverge,” she said. “If there is to be real connection and integration between the South and the North, we must narrow the distance between our values and our thinking.”

To that end, the president proposed that both Koreas jointly establish an inter-Korean exchange and cooperation office that would be tasked with realizing these ideas and establishing an international peace park inside the demilitarized zone on the inter-Korean border.

“Seoul is willing to share its experience in economic management and in developing special economic zones, as well as to provide systematic education and training opportunities relating to finance, tax administration and statistics,” the president added.

For the agenda for humanity, she vowed to expand humanitarian aid to North Koreans and discuss detailed measures with Pyongyang to build trust between the two nations.

Seoul will work with the United Nations to implement a program to provide health care to pregnant mothers and infants in North Korea through their first 1,000 days, for instance.

The president took the speech as a chance to ask for support and cooperation from international organizations, such as the United Nations and the World Bank, in joint development projects.

Those proposals entailed one crucial and persistent demand for Pyongyang, not only from Seoul but also its close allies, including the United States and China - giving up its nuclear ambitions.

“Should North Korea make the strategic decision to forgo its nuclear program, South Korea would be the first to offer its active support,” she said.

If necessary, Seoul would seek to create a Northeast Asia Development Bank with regional neighbors to spur economic development in North Korea and in surrounding areas.

Pyongyang did not immediately react to Park’s proposals.

“Wir sind ein Volk!” or “We are one people,” Park declared near the end of her speech, adding that the day will soon come when these powerful words that united the people of East and West Germany will also echo across the Korean Peninsula.

The speech ended with enthusiastic applause from the audience.

Her declaration here on Friday about unification and North Korea is comparable to the historic addresses made by past presidents in Berlin, the German capital. She chose Dresden this time, however, which marked the first time a Korean president paid a visit to a city that belonged to East Germany before reunification.

The tradition of speeches in Berlin dates back to March 1995, when President Kim Young-sam announced that Seoul would spare no effort in assisting Pyongyang in any field it needed.

Kim Dae-jung also made what came to be known as his Berlin Declaration in March of 2000, an address at the Free University of Berlin, where he appealed to North Korea to cooperate, stating that South Korea was ready to help the North “tide over its economic difficulties.” The two nations agreed to hold an inter-Korean summit that June, and it is widely believed that Kim’s declaration was an important factor in persuading the North to agree to the summit.

Following the ceremony at the Dresden University of Technology, President Park was slated to visit the Fraunhofer Institute for Ceramic Technologies and Systems IKTS, her last stop in Dresden. She will then fly to Frankfurt to meet with Korean nurses and miners sent to Germany as guest workers in the 1960s under her father’s administration. The president is scheduled to arrive in Seoul on Saturday afternoon.