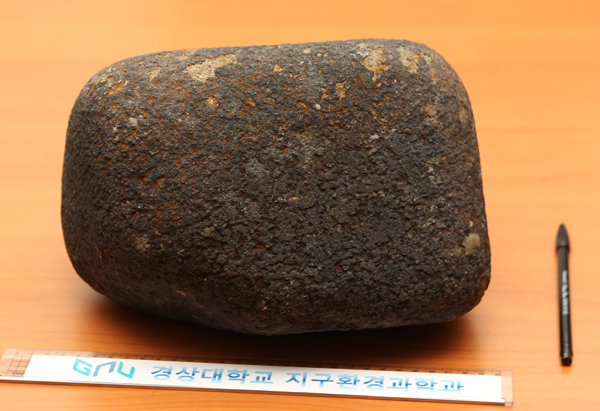 Gyeongsang National University yesterday said a rock found on March 17 in Jinju, South Gyeongsang, by a local resident is likely to be a chondrite, or a piece of a meteorite.

The 20.9-kilogram (46-pound) rock is the largest among the chondrites found after a meteorite entered the atmosphere above the capital region on March 9, exploding above Hamyang and Sancheong counties and falling into pieces in and possibly around Jinju. They were the first chondrites to be found in Korea in 71 years. The first was found in a local greenhouse on March 10, the second the following day and the third on March 16. Only the first two have been definitively confirmed by the Korea Polar Research Institute as chondrites.

The first three chondrites that were found were about nine kilograms, four kilograms and one kilogram, respectively. “We concluded that the rock is a chondrite because it contains enough metallic components to meet international standards [for chondrites],” said Jwa, Yong-joo, a professor in the College of Natural Sciences at Gyeongsang University.

The meteorite debris was first found by Kim Man-sik, a 54-year-old resident on March 17, in a small stream. He was reportedly driving to a mountain to hike and found the rock when he stopped his car to check his route about 1.5 kilometers (0.93 miles) away from where the first chondrite was found. On Thursday, Kim visited Jwa’s office to identify the rock. It is currently being kept in a vacuum incubator at the university to prevent weathering.

Meanwhile, others are turning their eyes toward the value of the chondrite. On meteorite trade websites, chondrites are bought and sold at $2 to $5 per gram. By that standard, the price of Kim’s chondrite could be worth as much as 106.9 million won, or $100,000. That figure could increase to as much as hundreds of millions of won, especially given that the value often rises with the rock’s size.