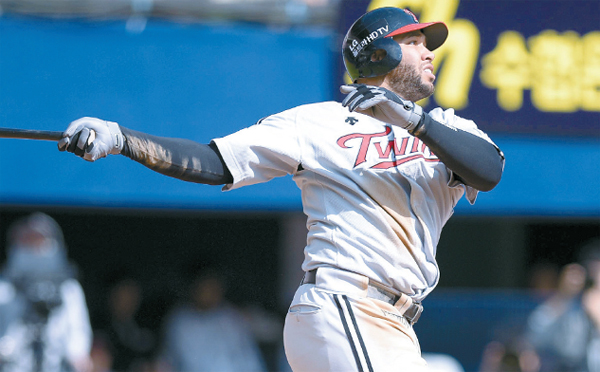 Josh Bell of the LG Twins blasts a two-run home run against the Doosan Bears in the top of the third yesterday at Jamsil Stadium in Songpa District, southeastern Seoul.[NEWSIS]

Waking up from a five-month hibernation, the 2014 Korea Baseball Organization season has begun its seven-month journey, with all six games of the opening weekend selling out, save for the game between the Lotte Giants and Hanwha Eagles.

The most exciting opening series was between the LG Twins and 2013 season runner-up Doosan Bears at Jamsil Stadium. The Seoul rivals split their two-game series and each benefited from the addition of a foreign bat.

In yesterday’s game, the Twins destroyed the Bears, 14-4, thanks to a two-run homer by third baseman Josh Bell and the first grand-slam of the season by team captain Lee Jin-young.

The 27-year-old American, who watched Jorge Cantu slug a three-run home run for the Bears in the KBO opener Saturday, showed off his power in the top of the third with a runner on first and the Twins ahead with a 2-1 lead. Bell crushed the 118-kilometer-per-hour (73-mile-per-hour) curveball from Bears’ starter Noh Kyung-eun on a 2-2 count over the right field fence. He hit .375, or three for eight, with 2 RBIs for the two games.

In the Saturday game, the Bears enjoyed having their Mexican import Cantu, whose three-run shot was the difference in a 5-4 victory. In the bottom of the third with two runners on base, two outs and the Bears behind 3-1, Cantu sent a 132-kilometer-per-hour hanging slider from Twins starter Kim Sun-woo 132 meters (433 feet) over the center field fence for a 4-3 lead.

Cantu missed most of the preseason due to several minor injuries, but it didn’t take him long to prove his value as a cleanup hitter.

“I’m very excited,” Cantu said. “I’m happy that I’m being a part of the Bears and the support the Bears fans showed in the ballpark was amazing. I think this will be a great season.”

Before yesterday’s game, the Twins announced the signing of lefty starter Everett Teaford in a one-year, $500,000 deal. The contract includes performance-based options, but the Twins didn’t specify the details on Teaford’s request.

The Twins said Teaford’s repertoire includes a 150-kilometer-per-hour four-seam fastball, cut fastball and curveball. He will arrive in Seoul on Wednesday.

Other new foreign faces also impressed fans with good performances. Yamaico Navarro of the Samsung Lions hit a two-run home run against Kia Tigers’ starter Song Eun-beom that gave the team a 2-0 lead in the bottom of the first of yesterday’s game, which the defending champions won 8-4.

On Saturday, new Tigers pitcher D.J. Houlton contributed to the team’s 2-1 victory by only allowing one run in six innings, while striking out six and walking three. His fastballs only reached 140 kilometers per hour, but he overpowered Lions’ hitters by mixing them up with changeups and pinpoint control.

The Tigers’ new closer, Jairo Asencio, who is considered to be one of the most important keys to a successful season, also picked up his first save in the Saturday game. That had Kia management breathing a bit easier after his poor preseason performance (0-1 with two saves and an ERA of 5.14).