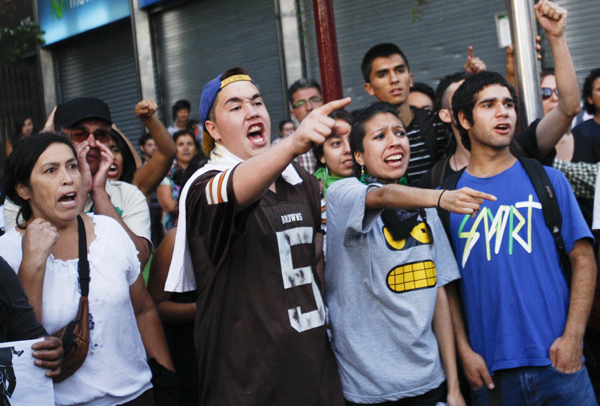 Protestors shout against police during a protest in Santiago, Chile, in 2012. The protest was in support of Social Movements of the Aysen Region, in Patagonia, which are protesting against the high cost of fuel, poor infrastructure, poor health services and employment equity.[AP/NEWSIS]

WASHINGTON, D.C. - Consider a simple statistic. Every month in the developing world, more than five million people migrate to urban areas, where jobs, schools and opportunities of all kinds are often easier to find. But when people migrate, the need for basic services - water, power, and transport - goes with them, highlighting the boom in infrastructure demand.

The reality is evident from Kenya to Kiribati - everywhere where rapid urbanization, the need to support trade and entrepreneurship, and efforts to confront the challenges of climate change have exposed a wide infrastructure deficit. And it is a deficit that confronts advanced economies as well.

Simply put, infrastructure construction and modernization worldwide needs to be part of a strategy for long-term global growth. That is why G-20 finance ministers, meeting recently for the first time this year in Sydney, Australia, singled out investment in infrastructure as one of the elements vital to ensuring a strong, sustainable and balanced recovery.

But, with G-20 finance ministers preparing to meet again in Washington, D.C., next month, a note of caution is in order: Simply increasing infrastructure investment is not enough to foster growth and job creation.

At the start of the financial crisis, both advanced and emerging-market economies pumped money into “shovel-ready” infrastructure projects to boost short-term economic growth and create jobs. Now, in the wake of the crisis, the infrastructure challenge has become more difficult to address. In emerging and developing economies, government budgets are constrained, while the private sector accounts for less than 15 percent of total infrastructure investment on average.

Indeed, a key challenge in financing infrastructure investment in emerging economies is that many of the commercial banks (mainly European) that had a significant presence in the past have withdrawn - and are unlikely to return until they repair their crisis-hit balance sheets and build capital to meet strengthened regulatory standards.

That leaves huge unmet financing needs. In emerging and developing economies, it is estimated that an additional $1 trillion to $1.5 trillion in annual investment will be required through 2020 to meet growth targets. Factoring in additional spending for reducing greenhouse-gas emissions or adapting to climate change could add $170 billion to $220 billion each year to the cost of these countries’ infrastructure needs.

But we also know that promoting infrastructure investment requires more than money. Some countries generate massive growth benefits from their infrastructure spending, while others hardly see a return. As a background note prepared by the World Bank Group for the G-20 explains, governments should pay more attention to the selection, quality, and management of infrastructure projects, as well as to the quality of the underlying investment climate.

Yes, all of that is easier said than done. As I heard in Sydney, many developing countries face real difficulties in identifying, preparing, and implementing projects. The price tag for technical, financial, economic and environmental feasibility studies and long-term plans can be high, running into the millions of dollars.

The World Bank Group has been helping developing countries build up their capacity in these areas. But more must be done to enable countries to develop a robust project pipeline that supports a stronger public-investment program, which is critical to any strategy to attract substantial resources from the private sector.

And, in today’s economic climate, attracting private financing is essential, because there is simply no way that public funding alone can close the infrastructure gap. Doing so will also require ensuring appropriate governance, predictable pricing structures and a credible regulatory environment.

Countries have no time to waste. The unique role of infrastructure in helping to provide basic services for poor people, creating jobs and opportunity, facilitating access to markets and ensuring sustainable growth in our ever-growing cities requires policy makers to act quickly and decisively. Copyright: Project Syndicate, 2014.

*The author is the managing director and CFO of the World Bank Group.