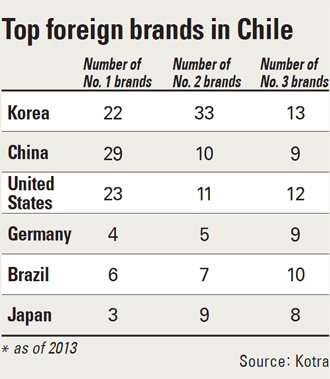 Korean exports to Chile have jumped nearly fivefold since the two countries signed a free trade agreement in 2003, according to the Korea Trade-Investment Promotion Agency (Kotra) yesterday.

The Korea-Chile FTA, Korea’s first FTA, marks the 10th anniversary of the pact taking effect tomorrow. Kotra said exports to Chile increased from $517 million in 2003 to $2.46 billion last year, while imports of Chilean products grew 4.4 times from $1.06 billion to $4.66 billion.

Last year, 22 of the 100 top products exported to Chile were No. 1 in the market, and 33 others were second. Eighty-four of the 100 products were among the top five foreign brands in their respective markets in Chile, it said.

China had 68 top five products in Chile and the United States 64, Kotra said.

Korean cars are the top foreign auto brands in Chile, according to Kotra. Other top Korean imports are polyethylene and cement clinker.

Ricardo Lessmann, chairman of Gildemeister, an importer of foreign cars in Chile, was quoted by Kotra as saying that Korean cars have improved significantly in quality and are standing shoulder to shoulder with cars from the United States, Japan and Europe.

Kotra said Chile could help Korea expand its market in North and South America and the European Union. Chile has FTAs with 60 countries that account for 93 percent of its exports.

Park Chul-ho, the head of Kotra’s emerging market research department, said the importance of Chile as an FTA hub will grow further. The Pacific Alliance, a trade bloc, will take effect this year among Chile, Mexico, Colombia and Peru.

Chile also is one of the initiating members of the Trans-Pacific Partnership, which is shaping up to be the world’s largest trading alliance.

“Our companies should look to Chile not only as an export market, but as a stepping stone to make inroads elsewhere,” Park said.

The Korea-Chile FTA laid the groundwork for Korea to emerge as one of the most active traders in the world, with nine FTAs covering 47 countries.

Korea’s trade with its FTA partners as a percentage of total trade was 13.8 percent in 2009, lagging behind that of China’s at 20.7 percent and Japan’s 17.7 percent.

But, as of last year, Korea was leading its Asian rivals at 35.3 percent, followed by China at 21.2 percent and Japan at 18.9 percent.