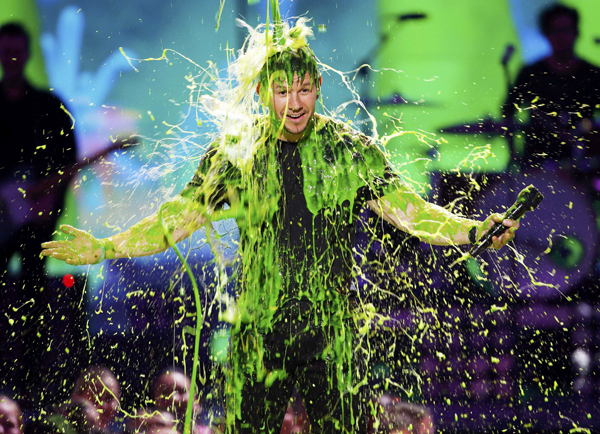 Shot from canons, bursting forth from geysers and babbling in a river across the stage, everything and everyone, even “un-slimable” host Mark Wahlberg, were soaked by the green stuff.

The British-Irish vocal group, who won favorite music group and favorite song for “Story of My Life,” avoided the slime, accepting the awards from London where they are preparing for an upcoming tour.

The show, in its 27th year, is an annual stop for Hollywood stars who are popular among teenage and young viewers.

It featured performances by singer Aloe Blacc and indie rock band American Authors, who closed with the hit “Best Day of My Life.”

“I just have to say that you guys have been the most loyal, dedicated people in my life because you continuously every year bless me with the opportunity to do what I love,” said Gomez.

A running gag throughout the stunt-filled show was how “Transformers” star Wahlberg could not be doused in slime.

But in the end, the actor was distracted by his kids and comedian Kevin Hart until the slime rained down on Wahlberg, who crossed himself and huddled to withstand the deluge.

“I wasn’t always a buttkicker. In fact, life has kicked my proverbial butt countless times in many ways through many years until I decided one day to start kicking back,” the 48-year-old actor who struggled with addiction early in his career.

“To all the kids around this wonderful blue planet, thank you for this awesome statue, and remember: when life is kicking your butt, never forget to kick it back right in the face,” Downey added.

Actor-comedian Adam Sandler, 47, made it rain orange balls on the crowd with a garbled magic spell while accepting his blimp for favorite movie actor.

Other winners included sci-fi adventure film “The Hunger Games: Catching Fire” as favorite movie and its star, Jennifer Lawrence, won for favorite movie actress and favorite female buttkicker, but she did not attend.

Dan Schneider, an executive producer of popular Nickelodeon shows over the past two decades such as “Kenan & Kel,” “iCarly” and “Sam & Cat,” won a lifetime achievement award.