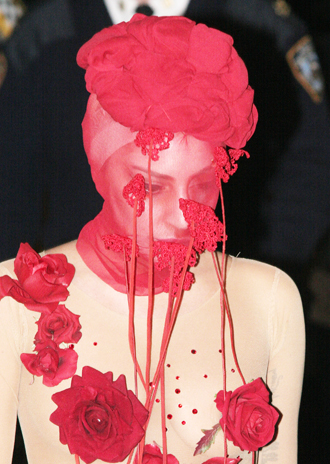 NEW YORK - Lady Gaga celebrated her 28th birthday with an energetic but short concert at the Roseland Ballroom in her first of seven performances at the venue that will close.

Gaga performed for an hour Friday night for a feverish crowd. She started with a slow version of “Born This Way” on piano, with the audience joining in.

She followed that with the jams “Monster” and “Bad Romance.” She danced and sang on the side of the stage in a red tight leotard.

“Thank you so much for spending my birthday with me,” she yelled to the audience, which included her actor-boyfriend Taylor Kinney and Nate Ruess, lead singer for the band Fun.

Gaga was in top form as she sang nearly a dozen songs, including “Just Dance,” an acoustic version of “Poker Face,” and the recent hit “Applause.” The concert’s main surprise: It was too short. After she ended, fans waited for the pop star to hit the stage again. She never did.

She performed some tracks from her recent album, “Artpop,” which has struggled to match the success of her other releases. But onstage, she showed no signs of slowing down.

“Thanks for making this the best birthday ever,” she said.

The New York-born singer will perform six more shows at the Roseland Ballroom, helping close the famed venue that opened eight decades ago. Past performers include The Rolling Stones, Madonna and Beyonce, who famously did four shows in 2011 when she was pregnant.

“How many New Yorkers are in here tonight?” Gaga asked early in the show. “Do you believe in love? Do you?”

The Grammy winner kept the concert tame compared to her showcase at the South by Southwest festival this month, which featured a performance artist vomiting paint on her. She thanked her fans a number of times in between songs.

“When I woke up this morning I was so happy,” she said. “I couldn’t wait to get here tonight. I have so many friends here ... so many fans I’ve grown up with for six whole years, seven whole years.”

Before singing the song “Dope,” she added: “Thanks for keeping me alive.”