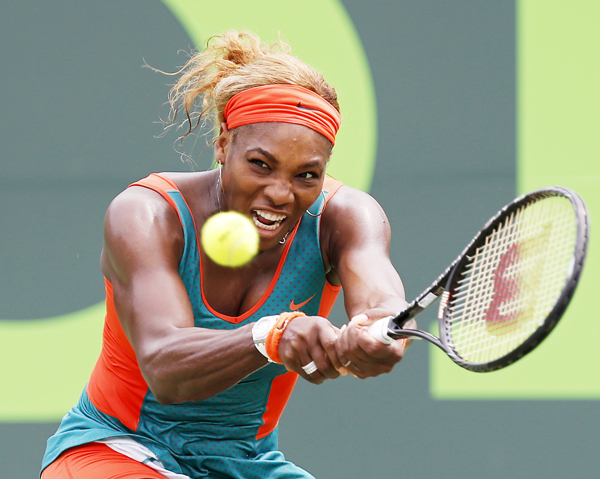 Serena Williams hits a backhand during the women’s final of the Sony Open at Crandon Tennis Center on Saturday.[USATODAY/NEWS1]

The celebration began with a series of happy hops that propelled Serena Williams across the court. Soon she was twirling, waving, laughing and mugging for the cameras - a familiar ritual by a perennial champion.

Williams won a record seventh Key Biscayne title Saturday when she overcame a slow start and a set point to beat Li Na 7-5, 6-1 at the Sony Open.

She surpassed the tournament record of six titles she shared with Andre Agassi.

“I was actually super excited at the end,” Williams said, “because I remember sitting here last year trying to get to six, thinking, ‘OK, obviously I want seven, but I don’t want to put the pressure on myself to get to seven.’ Obviously I wanted to have the most titles here.’’

No. 1-ranked Williams looked tense at the outset and served poorly, and she was broken twice to fall behind 5-2.

“At that moment I felt like I had nothing to lose,’’ Williams said. “I just was able to relax. Whenever I relax, I enjoy myself.’’

Li held a set point serving at 5-4, but Williams erased it with a backhand winner.

Williams needed 21 minutes more pull out the set. The final game went to deuce six times, but she finally won it with a booming backhand Li couldn’t handle.

Williams ran to her chair with a satisfied scream, her left fist leading the way. She dominated from there, sweeping the final five games.

The 17-time Grand Slam champion has more titles at Key Biscayne than at any other tournament.