Going too far as bad as going nowhere

Going too far as bad as going nowhere 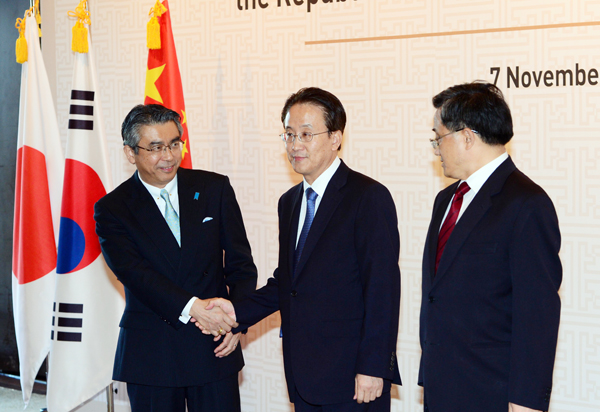 I spoke separately with three diplomats representing Korea, China and Japan in Beijing, and they all said Korea-China relations are the best ever. While they shared the view, they had different opinions.

The Chinese diplomat showed a smile of satisfaction. Beijing didn’t hide its discontent with South Korea during the Lee Myung-bak administration, which prioritized the alliance with the United States. So China is pleased that the Seoul-Beijing ties are improving in the Park Geun-hye government. He didn’t forget to mention his analysis: “Japan is the variable that made Korea-China relations more solid.” He was talking about collaborative efforts to protest Japan’s wrongheaded historical perspective. “It was actually Japanese Prime Minister Shinzo Abe who made the Ahn Jung-geun memorial possible.” The Chinese government had been careful with the project because of Japan, but Tokyo’s conservative swing changed Beijing’s attitude. He seemed to be content with the scenario of Korea and China versus Japan.

The Japanese diplomat complained there’s not much to do lately as Beijing-Tokyo ties are stalled. He seemed nervous and worried about Korea-Japan relations, as well. “When Korea should work with Japan to stand up against the neighboring giant,” he said, “Korea is too close to China.” In fact, Japan is trying to bring Korea around to its side. Tokyo worked hard for a Korea-Japan-U.S. summit and essentially considered it a bilateral summit with Korea.

So it may seem that Korea is becoming popular with China and Japan. But the Korean diplomat said, “Korea cannot enjoy being stuck between the two countries. It is not desirable to take a side.” His words reminded me of an article I read in the Global Times. Nankai University Professor Yang Lei compared the latest Northeast Asia situation to an isosceles triangle. Korea, China and Japan are located at each corner, and the distance between Korea and Japan is shorter than those between Korea and Japan and China and Japan. He predicted, “Japan is seeking to improve relations with Korea to check on China, but the current structure is likely to last for a while as the history issue poses an obstacle that cannot be overcome easily.”

The point is whether the structure corresponds to Korea’s national interest. Considering the Northeast Asian situation and dynamics comprehensively, the most desirable geometry would be an equilateral triangle. Then Korea’s role would expand and we would have more room to move about.

In international politics, you never know when the northwest wind will shift to the southeast. When you overly incline to a certain side, it is not easy to react when the wind changes. While we need to calmly maintain our principles on history issues, we should also have wisdom to leave room to respond to sudden changes. Not just in life, but also in international relations, going too far is just as bad as not going at all.

* The author is a Beijing correspondent for the JoongAng Ilbo.