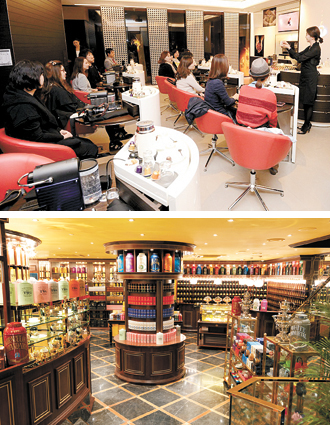 Earlier this month, a group of customers were learning how to brew a coffee at Nespresso’s flagship boutique, which sits along a famous, high-end fashion street in Cheongdam-dong, southern Seoul.

“If you put in the milk foam after making the espresso from the capsule, your drink will taste much like the latte that you drink at a cafe,” said the barista to a class of about 10 people.

“I applied for the class with my boyfriend as a date,” said Lee Soo-jin, 29, who signed up for the coffee class for White Day, a romantic holiday much like Valentine’s Day. “I plan on making my own coffee cocktails, like the blue lagoon that I learnt today.”

Changes are brewing along Cheongdam-dong’s fashion street, which long represented the apex of expensive foreign fashion brands like Louis Vuitton, Gucci, Boss and Dolce & Gabbana. And while those stores still attract plenty of big spenders, the street has been losing its glamour in recent years, particularly among younger consumers who are now more interested in trendy cuisine.

But Cheongdam-dong is reinventing itself, adding upscale food and beverage options, with shops like Nespresso, TWG Tea Salon & Boutique, Le Creuset and Johnnie Walker House setting up shop there. Yes, it still has the biggest luxury brands, but now it wants to be a street for gourmets, too.

The difference among other neighborhoods like Itaewon-dong in central Seoul or Garosu-gil just west of Cheongdam-dong is that Cheongdam-dong stores are trying to attract consumers by offering unique experiences, such as cooking or brewing classes like the one at the Nespresso shop.

A capsule coffee brand based in Switzerland, Nespresso’s shop in Cheongdam-dong, which opened in December 2012, was more than just a coffee shop - it was just the second “coffee experience store” in the world, after the first in the United States. It took the store two years to find just the right location, eventually choosing a spot right across from the Prada store and next to Jil Sanders. The building itself was designed to look very much like a coffee capsule.

Additionally a task force was formed by officials from its Swiss headquarters, a design house from Italy and its Korean employees to work on the overall designs and the interior for 10 months.

Nespresso currently holds two classes every Thursday, Friday and Saturday, which are so popular they are fully booked a month ahead.

George Garrop said the company put a lot of effort into setting up the shop there because Cheongdam-dong is a landmark of sophisticated lifestyles in Korea.

TWG Tea Salon & Boutique, which also opened on that same Cheongdam-dong street in January 2014, is run by TWG Tea in Singapore. Various kinds of tea and desserts are available on the first floor, and a tea salon that also serves food is on the second floor, all under the promise of “Singapore traditional tea culture.”

A French cookware manufacturer, Le Creuset, moved to the Chungdam intersection area, just down the street from Nespresso, early this year. “Eating well has become a part of culture in Korea,” said the marketing director of Le Creuset Korea. “There is greater demand for better cookware. We have designed an event to let customers cook with our pots and pans so that they can experience our brand.” 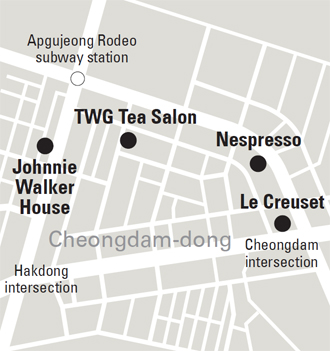 The British multinational alcoholic beverages company, Diageo Korea, has also opened its third Johnnie Walker House in the world in Cheongdam-dong, after opening two in China. The first basement level was designed to hold parties and events, while the ground floor has Johnnie Walker products for sale. The third floor offers bartender lessons and the fourth is a VIP lounge for dining.

“We opened our place in Cheongdam-dong in order to inform people about luxurious whiskey culture,” said Jin Woo-sik, a PR manager of Diageo Korea. “We had 800 customers a month last year, and the number jumped to 1,000 a month this year.”

This trend has already spread to nearby neighborhoods. In June 2006 the German kitchen utensils manufacturer Fissler opened up a gallery in Sinsa-dong, which is not far from Cheongdam-dong. The gallery is equipped with a cooking studio that can accommodate 20 people, and all sorts of foods are demonstrated.

How much does it cost to open such a store? Realtors estimate that a shop in this part of town can easily cost several billion won, or millions of dollars. But despite the heavy costs, gourmet brands are setting up in Cheongdam-dong because it has a huge influence in brands’ promotion.

“With the development of smartphones and SNS, pictures of the luxurious stores and the experience that they have spread very quickly,” said Kim Sung-soon of Cushman & Wakefield, the real estate consulting firm. “Even though the cost is huge, the promotional effect is much larger than in the past.”

In other words, the social media impact these days makes these expensive stores more cost effective than spending huge amounts of money on TV ads or other promotions.

“Gourmet businesses entering Cheongdam-dong imply that they are interested in selling not just tangible or concrete products and services but also a lifestyle,” said Kim from Cushman & Wakefield.