[Sponsored Report] SK Innovation to focus on growth in year ahead

[Sponsored Report] SK Innovation to focus on growth in year ahead 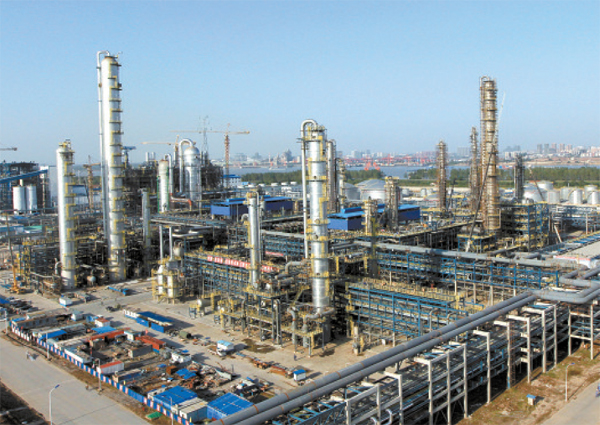 SK Innovation sees strong growth in 2014 with the completion of large projects such a naphtha cracking center in Wuhan, China.Provided by the company

SK Innovation, the holding company of SK Group’s petrochemical subsidiaries, is preparing for a fruitful year ahead, focusing on the strategic development of its businesses and the securing of new growth industries.

One of the keys to SK’s prosperity, according to the company, is to complete ongoing large-scale projects, including the launch of a lube base oil plant in Spain, a naphtha cracking center (NCC) in Wuhan, China, and a paraxylene factory in Ulsan.

SK Global Chemical, one of SK Innovation’s subsidiaries, has already begun harvesting the fruits of its investments. Its Wuhan NCC plant began manufacturing in January and is already making a profit in the Chinese petrochemical market.

And in the second half of this year, operation of its Ulsan paraxylene plant co-owned with JX Energy, a Japanese company, as well as a joint project with Jurong Aromatics to produce 4 million tons of petrochemicals, will begin.

SK Lubricants, another subsidiary of SK Innovation, plans to strengthen both its global business and the quality of its products. Its lubricant base oil plant under construction in a joint venture with Spain’s Repsol will start producing goods later this year. The factory will be a starting point for the company to expand its premium products to the European market. Another objective is to establish a new growth industry for SK in the battery or intelligent electronics business. The holding company has created a New Business Development department to unite the battery division and the information electronics (IE) material sector into its headquarters to gain synergy for the expansion of a new growth business.

The company has also formed a joint corporation with Beijing Electronics and Beijing Automotive Industry to invest in the electric vehicle (EV) battery business. By 2017, the production of EV batteries will increase to 20,000, the largest number so far of EV battery sales in China.

“We will prepare to jump higher for the future,” said Koo Ja-young, the vice chairman of SK Innovation.