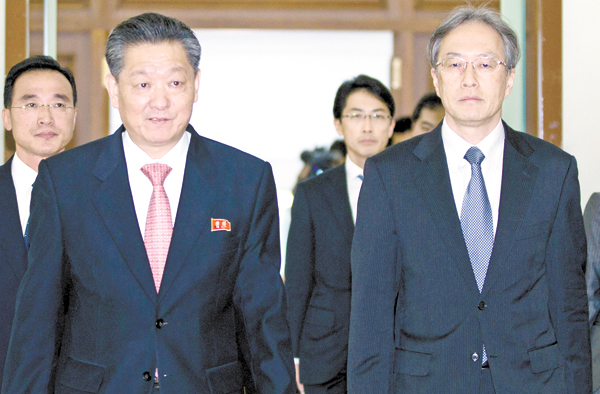 The North’s Foreign Ministry said in a statement carried by its official Korean Central News Agency, it “would not rule out a new form of nuclear test to further bolster [North Korea’s] nuclear deterrence,” the latest in a series of provocative actions and rhetoric from Pyongyang over the past month.

The statement further warned the United States against “acting rashly” and said that if Washington continued to try to isolate and pressure North Korea through the UN Security Council, it was prepared to retaliate “for self-defense.”

The threat of another test follows three conducted by the North in 2006, 2009 and 2013, and analysts speculated that a “new form” could indicate a test of a uranium bomb. The first two tests were confirmed by specialists as plutonium bombs; the type used in the February 2013 test has not been confirmed.

Such provocations come despite President Park Geun-hye’s recent attempts to demonstrate a more flexible attitude toward North Korea, including promoting her vision of peace and unification on the Korean Peninsula in her visits to The Hague and Germany last week. She was attempting to revive relations with North Korea, which soured after the North conducted its third nuclear test in February 2013 in defiance of UN resolutions. The result was stiffer international sanctions, including by Seoul, on Pyongyang.

Park’s reconciliatory gestures included her offer to revive long-stalled six-party talks to denuclearize the North, made at a three-way meeting with Japanese Prime Minister Shinzo Abe and U.S. President Barack Obama on Tuesday during a nuclear summit in The Hague. She also proposed a three-agenda road map to unification in a speech in Dresden on Friday. Earlier this year, she noted that unification would be a “bonanza” for both Koreas.

But Pyongyang appears to be ratcheting up tensions again, and over the past two months it has made provocative statements and gestures such as the firing of medium-range Rodong missiles, with a range of about 1,300 kilometers (807 miles), into the eastern sea on Wednesday. That followed a series of launches of shorter-range missiles earlier this month during U.S. and South Korean joint military drills.

On Thursday, the North’s Committee for the Peaceful Reunification of Korea criticized Park by name, calling her “a faithful servant and stooge of the United States” and a “peasant woman blabbering to herself” in response to the South Korean president’s speech at the Nuclear Security Summit calling for Pyongyang to end its nuclear program.

Seoul had not officially responded to the North Korean Foreign Ministry’s warning of a new nuclear test as of last evening.

Cheong Seong-chang, a North Korea researcher at the Sejong Institute, said Pyongyang probably had very mixed feelings about President Park’s recent reconciliation proposals. While welcoming her call for humanitarian aid and civilian infrastructure projects, he said, they were probably disappointed in her proposal for an inter-Korean exchange and cooperation office because they want high-level meetings, not working-level ones.

He said the proposals were probably seen as a “poisoned apple” to lure Pyongyang into an agreement to be absorbed by the South.

Separately, Pyongyang and Tokyo began their first official talks in 16 months yesterday in Beijing. They are also the first under the new leaders in both countries. Japanese officials said they would press to resolve the decades-old issue of Japanese nationals’ abductions by the North during the two-day high-level talks at the North Korean Embassy in Beijing. The officials were also expected to discuss Pyongyang’s recent missile launches.

North Korea was expected to push Japan to ease its sanctions on Pyongyang.