Down on their luck, more people turn to gosiwon

Down on their luck, more people turn to gosiwon 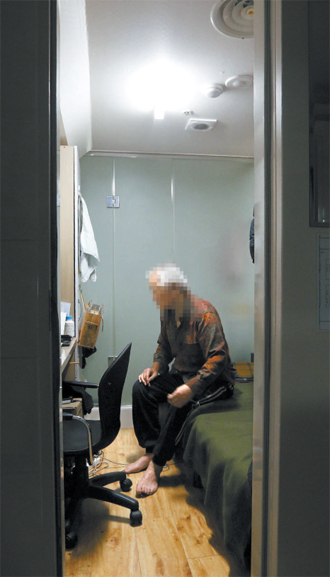 A 64-year-old gosiwon resident sits on a bed on March 16 in his small room. He came to this gosiwon area eight years ago but still can’t afford to move out despite his hard work.By Kim Sang-seon

In Korean society, once a person has fallen into poverty, it can be hard to transcend it. And often those who spiral down from the middle class or higher have no choice but to turn to gosiwon for temporary lodging or even long-term shelter.

Essentially a dorm room no bigger than 5 square meters (54 square feet), they are inexpensive places to stay that are largely utilized by university students who need to cram for exams. No lease is required and the cost of a month’s stay usually averages between 200,000 won ($187) and 500,000 won. Shared bathrooms and kitchen areas are also common.

But at the same time, for those experiencing financial difficulties, gosiwon can mark the edge of a precipice - a place where those who have failed are relegated - and in the past few years, more and more people have found themselves in this very kind of situation.

In southwestern Seoul, about a dozen gosiwon line the two-lane road near Yeongdeungpo Market. When JoongAng Ilbo reporters visited one of them on March 10, what they saw was the floor of a building packed with more than 20 tiny rooms.

Eighteen of them were occupied by those in their 40s and 50s.

The reporting team talked to the managers of five gosiwon in the area, in which 173 residents live in total. Because no contract is required, it was difficult to pinpoint exact figures, but based on what they were told by the managers, the reporters estimated that about 100 of the residents were middle-aged.

It appeared that most of the tenants were experiencing economic difficulties. Most of the manual labor workers paid the 210,000 won monthly fee in installments.

“Many of the gosiwon residents have graduated from decent universities,” one of the managers said. “Most [of the residents] were driven out here when they lost their family after losing their jobs or their businesses failed.”

He added that he was once an employee at a medical equipment company and also came to that part of town when he lost his job during the 1997 Asian financial crisis.

“Once you are branded a credit delinquent, it’s difficult to even have a bank account,” the manager added. “A man in his 50s living in this gosiwon felt miserable that he couldn’t turn back the clock, and he eventually committed suicide.”

A 60-year-old resident surnamed Hwang said he was once a department head in a large construction company and also lost his job during the economic downturn.

Despite an 18-year career, he couldn’t find another job. Hwang opened a small restaurant, but it went out of business after less than two years and cost him his entire severance.

When he failed again in stock investments and was deemed financially incompetent, his wife asked for a divorce.

“When a white-collar worker in his 40s is kicked out of company, just like me, it gets really hard to land another job,” Hwang added.

He now looks for daily construction work when he can find it. “[A dismissal] is regarded as the failure of the individual, and there is no way of using their experiences by re-employment.”

But as well as seasoned workers, those living in gosiwon who are in their 20s and 30s are also increasing. Less than 10 of the younger residents among the five gosiwon were studying for tests, which was the original idea behind that type of lodging. The rest resided there for the cheap rent.

Jeong, a 34-year-old man living in a gosiwon in that neighborhood, graduated from a respectable university in Seoul. He said he prepared for the public administration examination during his 20s but never passed. For the next three years, he had no luck finding a job.

He once worked for a securities company as an intern, but he never became a regular employee.

“I wanted to make up for the years I spent studying for the examination, but it’s getting harder to get a foot in the door at companies as a new employee since I’m getting older,” Jeong said.

Unfortunately for those in this situation, the research is dire, and the possibility of upward mobility is slim.

According to the Korea Institute for Health and Social Affairs, the poverty exit rate - or the percentage of people who were able to rise from the lower class to the middle or wealthy classes - plummeted from 31.7 percent in 2006 down to 23.45 percent in 2012.

“They can only be helped through the support of the community,” said Kim Mun-jo, a professor in the department of sociology at Korea University. “[The government] should set up a fundamental system to give people a second chance, providing re-employment training or minimum housing expenses.”

But even though the odds are grim, some still try to stand on their own feet again by using aid from the central and local government.

One 58-year-old woman suffered a severe financial setback after her husband died five years ago and she was forced to take on responsibility for his debts. She was able to avoid some damage by working out a debt management plan in 2011 at the Credit Counselling and Recovery Service, which allowed her to pay back her 4.5 million debt in installments over the next five years. It also exempted her from having to pay overdue interest.

She currently works as a waitress at a small restaurant and pays back her debt regularly and on time. After borrowing 5 million won from the recovery service, she moved into a two-room house.

Another woman in her 50s is hoping her life will improve with assistance from the government. She lost her savings and her apartment in 2007 after making a number of bad investments in the stock market.

She was ultimately forced out onto the streets and had to send her children away to live with relatives. After going to the local government office for help, she was able to obtain financial support and in 2012 moved to a monthly rental unit with her children.