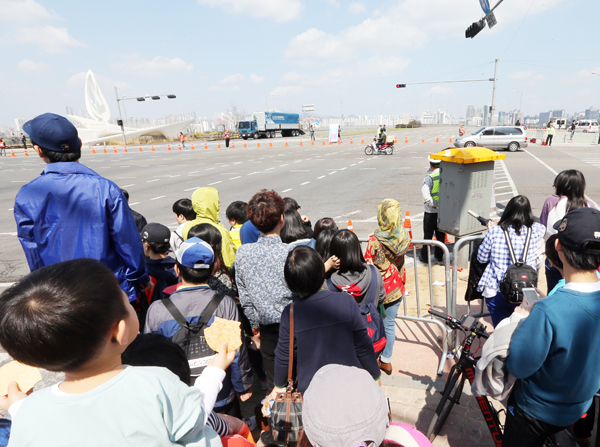 People watch the filming of “The Avengers: Age of Ultron” yesterday on the southern end of Mapo Bridge over the Han River in western Seoul. By Kang Jung-hyun

Some enthusiastic superhero movie lovers in Seoul found it hard to stay calm yesterday when scenes from the upcoming “The Avengers: Age of Ultron” were filmed on a familiar bridge.

Dozens of people - some with sophisticated cameras and telescopes - were near Mapo Bridge early yesterday morning to get a sneak peek at the shooting, but were soon warned away by film crews and security guards.

The team from Marvel Studios began shooting at 6:00 a.m. and worked until 5:30 p.m. on the bridge over the Han River. Traffic on the bridge was completely halted during that time.

Some members of a bicycle club were involved in scuffles after learning they could not use the bridge and the surrounding roads. “I knew that Mapo Bridge would be blocked, but I didn’t know that they would close the area leading into the park,” a man with the club complained. He was referring to the large park below the bridge, which is popular with bike riders and strolling pedestrians.

Officials drew criticism after traffic-monitoring CCTV systems streamed a bird’s-eye view of the congestion over the Internet. The website of the Seoul Metropolitan Facilities Management Corporation crashed because of the heavy traffic; the agency later altered the aim of the surveillance cameras to hide the moviemaking scene at the film company’s request; that angered people who wanted to get a sneak preview of the film online.

The fuss seemed to add some weight to criticism about the remaining shooting schedule and whether traffic control measures and alerts are sufficient. The shooting will continue sporadically until April 13.

The controlled areas will include important arteries near the Gangnam Subway Station and near Digital Media City (DMC) in Sangam-dong, western Seoul. Aware of the expected hassles, Joss Whedon, the director of the Hollywood film, issued an apology to Seoul citizens for the inconvenience associated with the filming.

“I’m really grateful and excited to be filming in your city,” Whedon said in a video. “We’re going to mess it up a bit and inconvenience some people for a few days, and I apologize for that. I know what that’s like. I live in Los Angeles. I hope that it will be worth it.”

The studio said it would portray Seoul as a futuristic city known for its advanced IT industries. The original “Avengers” movie was a major hit in Korea, with sales of more than seven million tickets.