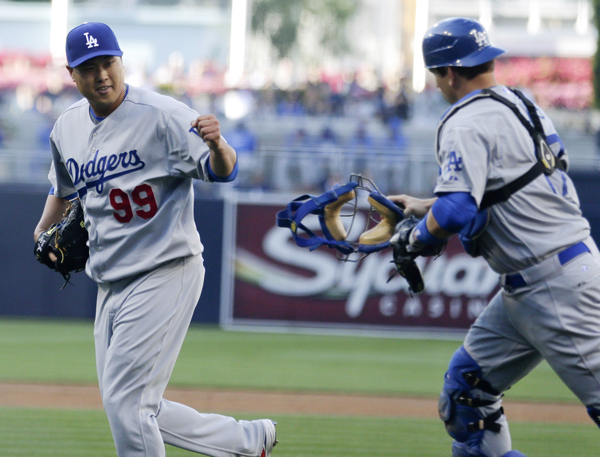 Ryu Hyun-jin of the Los Angeles Dodgers failed to pick up his second win of the season, despite pitching seven scoreless innings against the San Diego Padres in the nationally televised U.S. opener yesterday morning, Korean time.

The Dodgers ended up losing, 3-1, at Petco Field in San Diego.

With LA’s lefty ace Clayton Kershaw on the 15-day disabled list for the first time in his career, Ryu took the mound for the Dodgers.

The Korean lefty won his first start against the Arizona Diamondbacks in Australia, throwing five scoreless innings and striking out five.

Against the Padres, Ryu again showed there is no such thing as a “sophomore jinx” for him as he got out of jams in the first and second innings. In seven innings, he allowed no runs on three hits and two walks while striking out seven.

“I’m satisfied with my performance today, except for the team’s lose,” said Ryu. “Well, it’s just one game. My job is to be prepared for the next game against the San Francisco Giants.”

Ryu, who often struggled in first innings last season (with a 5.10 ERA) had a rough start against the Padres. He walked Padre leadoff hitter Everth Cabrera on throwing seven pitches. He then gave up a single to Chris Denorfia, putting runners on second and third with nobody out. After striking out Chase Headley, he walked the next batter to load the bases with one out. But Ryu, who got the third most double plays (26) in Major League Baseball last season, induced Yonder Alonso to swing at the first pitch and hit into a pitcher-to-catcher to first double play.

After his rough start, Ryu improved in every subsequent inning. He threw 21 pitches in the first inning but used only 34 pitches over the next three innings.

It looked like his best breaking ball wasn’t his changeup. He had trouble locating his changeups, especially early in the game, but he used curveballs and sliders to get out of trouble. Three of the seven strikeouts were on fastballs, two on sliders and one each on a curveball and changeup.

“I can’t deny that I was a bit nervous since it was the opening game in America,” said Ryu. “But I think I could do it again happily if the manager asks me next season. I’m also happy that my curveballs and sliders, which I have been consistently trying to improve, worked well today.”

He added that he has completely recovered from a sore big toe on his right foot that he sustained in Australia.

The Dodgers took the lead on a single by Carl Crawford with two out in the fifth. He went the other way with a 0-2 pitch from Padres starter Andrew Cashner, hitting it over third baseman Headley to bring in Dee Gordon from second.