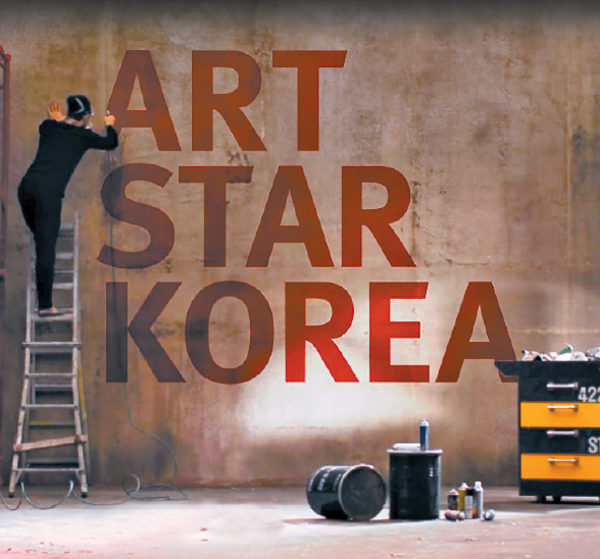 Is it possible to create an art show that can appeal to the average TV viewer?

More importantly, is it right to churn out work and parade it as art for the sake of ratings?

Even before airing its first episode on Sunday night, debates surrounded the survival show “Art Star Korea,” in which 15 artists battle it out to become Korea’s first “Art Star.”

Visual art has long enjoyed a status as one of the higher forms of art, so when a TV program promised to make a three-to-four-day competition of the creative process, it caused quite a furor.

Ahead of the show’s premiere, Program Director Im Woo-sik, Ban E-jung, one of two mentors on the show, and judges Yoo Jin-sang and Hong Kyung-han sat down to talk about the significance of the program and why they agreed to take part.

“We did expect some controversy, but even criticism about the program was meaningful as people don’t usually talk about art in the first place,” said Im, whose personal interest in art and up-and-coming artists has paved the way for the Story On show.

As “art insiders,” Hong, Yoo and Ban said that despite the backlash there is a lot the art world can gain from the show.

“Some look at it in a kind manner, and of course some don’t,” said Hong, editor of the contemporary art journal “Article.”

“But I found that either for or against, people were very constructive with their arguments, which I like to see,” he said, adding the discourse on the program “showed that Korea had a healthy art industry.”

For Yoo, professor at Kaywon School of Art and Design, the most concerning aspect was the show’s competitive nature, in which artists have to churn out one piece after another each week. 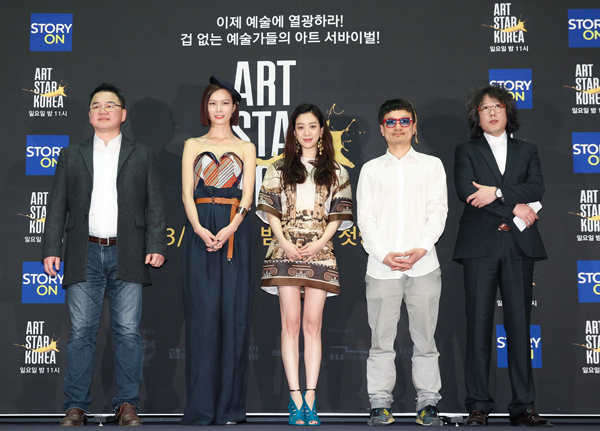 “We worried the artists wouldn’t be able to cope and that it’d yield low-quality work,” said Yoo, adding that he was surprised to find time constraints had no effect on the output.

“I don’t think putting people in a competitive environment is as big a problem as they make it out to be,” said Ban, an art critic. “A lot of art competitions work on the same premise, so it’s quite realistic in that sense.”

For the 15 (now down to 14) contestants, at least, the cutthroat environment does promise some priceless incentives.

Three finalists will exhibit their work at the Seoul Museum of Art; the finalist will be given a private exhibition in addition to 100 million won ($93,653), an atelier and a residency program abroad.

And through its eclectic contestants who specialize in everything and anything - from sculpture to media art to installation works - Ban said that more so than “uncovering new talent,” he hoped the public would learn more about art.

“Rather than bringing the standard of art down to popularize it, I see it as bringing the gaze upward,” said Ban, addressing one of the concerns the show raised among connoisseurs.

But enlightening the public through critiquing the participants’ work will be no easy feat for the judges.

“I thought hard [about participating in the show] because of that process, as others probably would have done, too,” said Hong. “But then I wondered, why not show the real process that takes place at countless competitions to the public?”

And despite the backlash, Im said the time felt right.

“Surrounding art there is this mysticism or stoicism, if you will, especially around modern art. And some of it may be needed and some may see this [program] as devaluing art. But it’s clear that every year, the taste of the public improves and there is greater demand, too,” said Yoo.

And if demand for the show increases, there is a possibility that some sort of viewer participation may be added in the second season.

“We’d have to change the format slightly, but it’s possible,” said Im.

He knows good art “just as you know good music when you hear it,” he said, and he is sure the public would be able to tell the real deal from the fake.

While it remains to be seen if there will be a second season, Im said he has two objectives for “Art Star Korea.”

“Second, I find that while people are open to talking about movies, dramas and the like, they usually shy away from art. We want to change that. If the program will get people to start talking about what is good and what is bad in art, I think it will be a success.”