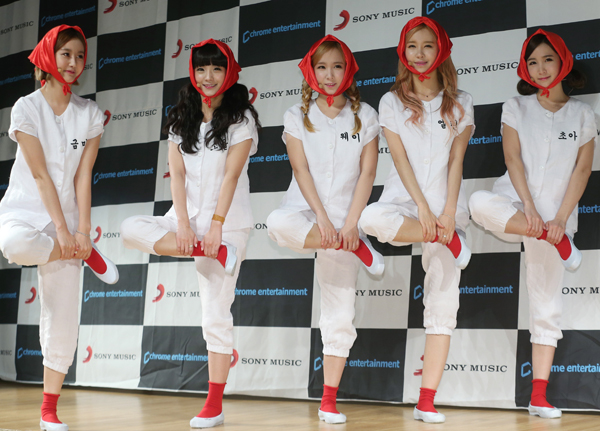 Last Friday, a gang of 20-something men gathered in Gwanghwamun, central Seoul, for a press conference by five-member girl group Crayon Pop to showcase their new song, “Uh-ee.” The men started chanting “Cray-on-Pop!” and continued for a long time.

In the Korean entertainment industry, Crayon Pop is considered something of a new breed because of their unusual stage performances. Clad in white helmets and wearing tracksuit pants under buoyant skirts, the girls established themselves through their viral hit single “Bar Bar Bar.”

To Crayon Pop, being sophisticated or sexy are not priorities. Novelty is the No. 1 goal.

“We’ve had a marathon of discussions to come up with an original concept,” said Cho-a, 23, to the media last week.

The act has been noticed beyond Korea. Following international parodies of their music video, Lady Gaga has invited Crayon Pop to open her fourth American tour “artRAVE: The ARTPOP Ball” in June.

“Though we really appreciate all your support throughout last year, the five of us have been under huge pressure because we had to create something more interesting,” noted 25-year-old Gummy, Crayon Pop’s leader.

For the group’s new album, the white helmets were replaced with red scarves, and some traditional touches were added to the members’ attire.

“As we were sharing thoughts about new styles, it occurred to us that wearing hanbok (traditional Korean clothing) would not only be very pretty but also convenient.”

Contrary to popular practice in today’s Korean pop industry, the band did not recruit American or European composers to create their songs. But like last year’s “Bar Bar Bar,” their new single, “Uh-ee,” is easy, fun, and, of course, addictive. The group told the press that they tried to combine dance and trot, Korea’s oldest pop-music genre, into one.

When asked whether they were too dedicated to showing a cartoonish or comical side, they stopped smiling and answered gravely: “We are not just trying to make people laugh at our song. We are trying to do something creative [in pop music].”

Though it’s still unknown whether they will strike gold once again, one thing is clear: the group has taken a step closer to becoming true artists.