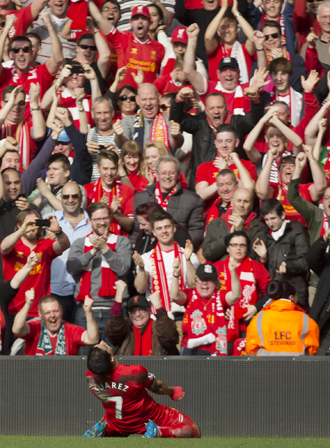 Liverpool outclassed Tottenham Hotspur, 4-0, at Anfield on Sunday to surge to the top of the Premier League table and raise hopes for the clubs’ first English title in 24 years.

An eighth successive victory for Brendan Rodgers’ team lifted it two points clear of Chelsea with a much better goal difference and four ahead of Manchester City, who has two games in hand.

Liverpool will be champions if they win their six remaining games, as City and Chelsea, who both dropped points on Saturday, still have to visit Anfield.

On a good day for Merseyside and a bad one for London sides, Liverpool’s neighbors, Everton, won, 3-1, at bottom club Fulham, taking it further ahead of sixth-place Tottenham and keeping the pressure on Arsenal for the fourth Champions League place.

Liverpool has not won the English title since 1990, two years before the Premier League began.

Having beat the Spurs 5-0 in December, which led to the sacking of Tottenham manager Andre Villas-Boas, they dominated from the start again.

It took only two minutes for the first of many defensive errors by the visitors, when Glen Johnson was allowed to cross from the right and force an own goal by Younes Kaboul.

Luis Suarez doubled the lead in the 25th minute with his 29th goal of the season, all in the League. That broke the Liverpool club record for a Premier League campaign, set by Robbie Fowler in 1995-96.

The Uruguayan’s tally is all the more remarkable because he missed the first five games because of a suspension for biting Chelsea’s Branislav Ivanovic.

In the second half, Brazilian Philippe Coutinho ran from just inside the Spurs half to score the third goal from the 20-meter area and England midfielder Jordan Henderson’s long free kick went straight in for the fourth.

For all Tottenham’s weaknesses, it was another impressive performance by Liverpool under Rodgers, who has revitalized them in two seasons since joining from Swansea City, and they lead the standings for the first time since Christmas.

Manchester City dropped two points on Saturday when they were held 1-1 at Arsenal and Chelsea’s manager Jose Mourinho declared it was “impossible” for his team to win the title after it suffered an unexpected 1-0 defeat by relegation strugglers Crystal Palace.

After an own goal by Fulham goalkeeper David Stockdale, Ashkan Dejagah equalized with a fierce drive, but Everton hit back with late goals from substitutes Kevin Mirallas and Steven Naismith.

Everton is now four points behind Arsenal, but they have a game in hand and host the London side Sunday.

Their manager, Roberto Martinez, praised the team’s character in winning a fifth successive game as well as his own substitutions, which transformed the game after a tired-looking first-half display.

Fulham’s German manager Felix Magath, a specialist in saving sides from relegation during his time in the Bundesliga, has his work cut out if he expects to do the same with the West London club.

They remained at the bottom, five points from safety and one behind Sunderland, which hosts West Ham United on Monday.