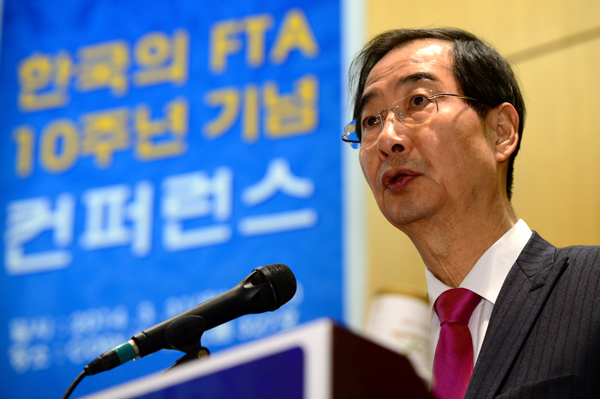 Korea needs to concentrate on negotiating for better terms of non-tariff barriers such as environmental standards and intellectual property, as well as in service and investment regulations in the future world trade scene, a local trade expert said yesterday.

Presenting a blueprint for Korea’s future free trade policies at the Korea International Trade Association (KITA) conference, Chung Chul, Asia-Pacific director from the Korea Institute for International Economic Policy, said the world’s largest economies are fiercely competing with each other to attract emerging economies like Korea to their large-size trade blocs such as the Trans-Pacific Partnership.

This puts Korea in a better position when negotiating for a bilateral free trade pact, and even multilateral pact such as the Trans-Pacific Partnership, which is shaping up to be the world’s largest trading bloc. Korea is trying to belatedly join the TPP.

Korea has come a long way since it signed its first free trade agreement with a foreign country, Chile, in 2003. During the past decade, a total of 10 free trade pacts between Korea and major countries or economic blocs have become effective.

The conference, marking the 10th anniversary of the Korea-Chile FTA, was held to evaluate achievements from several FTA deals and remaining tasks including the TPP at COEX in Samseong-dong, southern Seoul.

“Wrapping up the initial part of our FTA history, Korea now has to begin writing the second chapter of it,” said Han Duck-soo, KITA chairman. “With the accomplishments and experience from FTA in the past decade, the country has to take the lead in institutionalizing the consolidation of East Asian economies and in pursuing an open regionalism that connects our region and trade partners from other blocs like the United States and European Union.”

Ahn Duk-geun, an international trade law and policy professor at the Seoul National University Graduate School of International Studies, also added that Korea will have to make sure to match global non-tariff barrier standards with domestic policies and produce professionals who can deal with potential trade conflicts like investor-state disputes.

Reviewing past trade pacts, experts said the auto industry benefited the most from trade agreements with the United States and European Union but warned that local auto companies and auto parts manufacturers will have to boost production capacity to keep up with the increase in exports.

Regarding the most vulnerable industries, agricultural and livestock, meat imports have been limited, said Jeong Min-kook, from the Korea Rural Economic Institute.

However, Jeong said that foreign meats will take a larger part of the local market as time passes and FTAs reach their full effect over the next decade. He added that the government should come up with management support measures for vulnerable industries.

Kim Young-hwan, head of the FTA Trade Information and Business Support Center, also warned about limitations of Korea’s past FTAs. He said Korea has only seen a sharp rise in trade with emerging economies and countries that didn’t initially trade much with Korea.