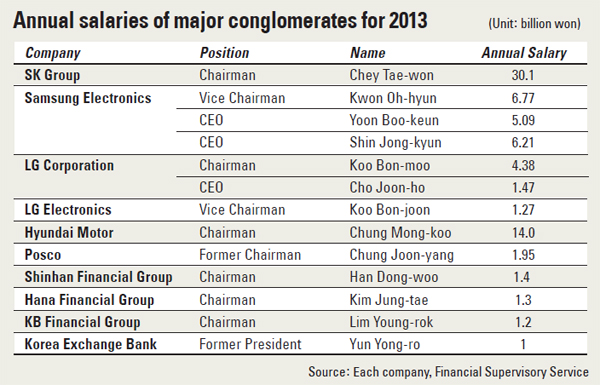 A total of 179 companies in Korea reported for the first time the salaries of about 530 top executives, all serving on boards of directors.

Under a revised capital market law, all companies are required to report the compensation of board members who receive 500 million won ($468,566) or more.

That put him as the top earner among executives whose compensations were disclosed yesterday.

Some representatives of the country’s leading corporate giants, such as Samsung Electronics Chairman Lee Kun-hee and Samsung Electronics Vice Chairman Jay Y. Lee, the chairman’s heir-apparent, were excluded from the disclosure as they don’t serve on boards of directors.

The compensation of Samsung executives, which earned the most media attention, were comparatively moderate, with Samsung Electronics Vice Chairman Kwon Oh-hyun taking home 6.77 billion won, according to the company’s annual business report submitted to the Financial Supervisory Service.

His predecessor Lee Pal-seung last year received 1.2 billion won in compensation. Considering that the former chairman’s base salary was 300 million won, the incumbent chairman’s total compensation could end up close to 1 billion won.

Meanwhile, earlier this year the heads of the four financial groups as well as bank presidents agreed to return 30 percent to 40 percent off their annual salary as part of efforts to repair their damaged public images resulting form last year’s money laundering accusations, loan fraud and the recent personal information security breach that affected millions of accounts.

The son-in-law of Hyundai Motor Group Chairman Chung Mong-koo and the head of Hyundai Card Chung Tae-young’s annual compensation was 2.6 billion won including the 886 million won he got from Hyundai Commercial.