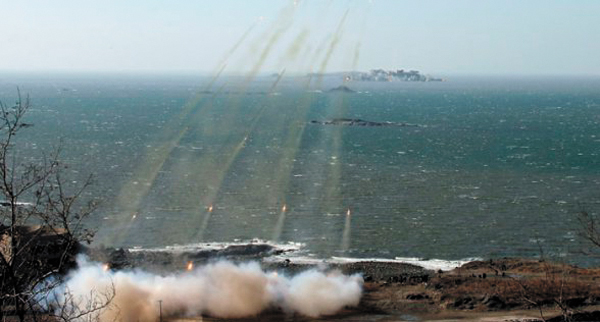 North and South Korea exchanged artillery fire yesterday near the disputed sea border off the west coast following a series of recent provocations by Pyongyang, which is peeved at ongoing joint military exercises between Seoul and Washington and talk of negotiations to shut down its nuclear weapons program.

North Korea fired about 500 shells from artillery and rocket launchers between 12:15 p.m. and 3:30 p.m. in the direction of the Northern Limit Line, the disputed maritime boundary in the Yellow Sea, said Kim Min-seok, spokesman of the South’s Ministry of National Defense.

Only about 100 of the shells fell in South Korean waters. In return, South Korea fired about 300 shells with its K9 artillery system, Kim said.

The skirmish came after North Korea sent a rare fax message to the South Korean 2nd Navy Fleet Command at 8 a.m. yesterday notifying it of a plan to launch live-fire drills in seven areas near five front-line islands close to the NLL. It also warned against any boat movements in the areas.

One of the five islands includes Yeonpyeong Island, which was bombarded by North Korea in November 2010, killing four people. Yesterday was the first time the South Korean military has fired into North Korean territory since then.

All of the residents of the five islands were evacuated to shelters, according to the South’s Defense Ministry. As of yesterday afternoon, no injuries had been reported.

The United Nations Command Military Armistice Commission sent a notification to North Korea at 3 p.m. calling on it to stop the firing, Seoul’s Defense Ministry said. The commission also proposed general-level talks at the truce village of Panmunjom between the commission and Pyongyang, but the regime did not send a reply.

A South Korean government official told reporters that North Korea used a variety of artillery in the drills, including 100-millimeter (3.9-inch), 122-millimeter and 240-millimeter calibers. Most of the shells that crossed the NLL fell near Baengnyeong Island, the official said.

“It is a highly planned, deliberate provocation,” the official said. “North Korea fired all of the shells toward the South.”

The official added that the North’s firing was part of “package of provocations” following missile launches and the threat of a nuclear weapons test.

Seoul and Washington say the drills, Key Resolve and Foal Eagle, are defensive in nature, while Pyongyang has angrily called them a rehearsal of war with the North.

On Sunday, North Korea’s Foreign Ministry warned in a statement that it will conduct “a new form of nuclear test,” implying a fourth underground nuclear test following tests in 2006, 2009 and 2013. The first two tests were confirmed by specialists as plutonium bombs. The type used in the February 2013 test has not been confirmed.

Experts wonder whether a “new form” of test signifies a device made from uranium rather than plutonium.

Over the weekend, North Korea condemned South Korean President Park Geun-hye’s speech calling for denuclearization of the regime at a Nuclear Security Summit in The Hague and a three-way summit among Seoul, Washington and Tokyo on the sidelines of the summit, in which the allies reached a consensus on the same issue.

According to Seoul, they crossed the NLL on Thursday in a fishing boat and got arrested by the South Korean Navy. Just six hours after the arrest, the fishermen were all released and sent back to the North.

On Friday, they appeared at a press conference broadcast by the North’s Korean Central Television, claiming that they were “assaulted with iron bats and forced to defect to the South” by the South Korean Navy.

On Sunday, the South Korean Defense Ministry said in a statement that the fishermen ignored the Navy’s warning to return to the North. Three hours after a warning shot, the Navy seized the ship without violence and returned them home. The Navy even gave them drinking water and Choco Pies, a popular South Korean chocolate snack, according to the military.

Relations between the two Koreas have been souring since the successful reunions of the 1950-53 Korean War-separated families in February.

Pyongyang has called for sanctions on the regime to be eased, including the so-called May 24 sanctions in which Seoul froze all government-level aid to the regime in 2010, and the resumption of tours to Mount Kumgang resort. The May 24 sanctions came in the aftermath of the sinking of the South Korean warship Cheonan in March 2010, which a group of international investigators concluded was torpedoed by Pyongyang. North Korea has denied the allegation.

Mount Kumgang resort has been shut since the shooting of a South Korean tourist there in July 2008.