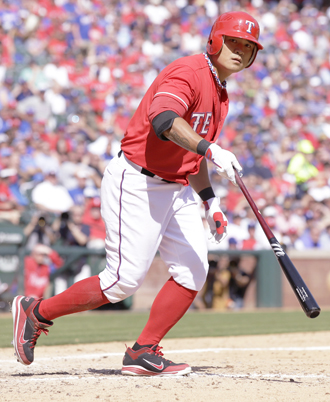 Choo Shin-soo of the Texas Rangers gets a seventh-inning walk Monday in the team’s season opener against the Philadelphia Phillies at Globe Life Park in Arlington, Texas. [AP/NEWSIS]

Jimmy Rollins had a grand slam during his memorable opening day for the Philadelphia Phillies, who needed a lot of runs to get ace Cliff Lee a victory in his return to Texas.

Left fielder Choo Shin-soo went 0-4 with a walk in his Rangers debut.

Rollins hit his 200th career homer and pinch-hitter John Mayberry Jr. had a tie-breaking two-run double that put the Phillies ahead for good in a wild 14-10 victory Monday.

“J-Roll, with the big pop early, just really set the tone and got things going,’’ Phillies manager Ryne Sandberg said. “I think it was contagious after that.’’

The Phillies had 17 hits and their most runs in a season opener since 1900. It was more than enough to make up for a rough outing for Lee (1-0), who was unable to protect a 6-0 lead after Rollins homered in the second inning.

Rollins, whose wife is expecting their second child, flew to Texas on Sunday, a day after the rest of the team did.

“I didn’t want to come here and then have to fly to Philadelphia,’’ Rollins said. “The baby has let me go out and play ball for a few more days.’’

Marlon Byrd and Cody Asche also homered for the Phillies, who beat the Boston Beaneaters 19-17 in their 1900 opener.

Converted Rangers reliever Tanner Scheppers gave up seven runs over four innings. But the game was tied when Scheppers threw his last pitch.

Mayberry, a first-round draft pick by the Rangers in 2005 who never played for the big league club and was traded three years later, got his tie-breaking hit in the fifth against Pedro Figueroa (0-1) for a 9-7 lead.

Lee matched his career high by allowing eight runs and struck out only one, but the left-hander made it through five innings in another less-than-stellar opener for him in the Rangers’ home ballpark.