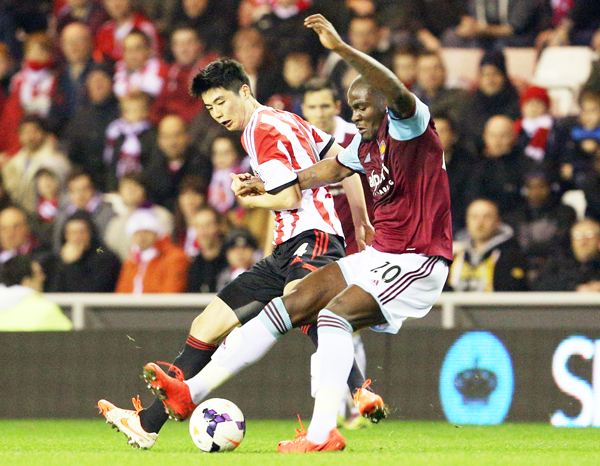 England international Andy Carroll scored one goal and laid on another as West Ham United piled on the relegation woes for Sunderland with a 2-1 victory Monday at the Stadium of Light.

The former Newcastle United striker enjoyed his return to his native North East after grabbing a trademark goal in the ninth minute, rising high at the far post to powerfully head in a left-wing corner.

Sunderland was unlucky not to be awarded a first-half penalty when visiting midfielder Kevin Nolan brushed the ball away with his elbow on the edge of the area.

Carroll then set up West Ham’s second goal five minutes after the interval, when he chested the ball down for Mohamed Diame and the Senegalese player’s deflected shot from 18 meters (59 feet) beat goalkeeper Vito Mannone.

Gus Poyet’s Sunderland perked up with the introduction of Adam Johnson, and the substitute gave them hope when he curled a delightful left-foot shot into the top corner of the net with 25 minutes to go.

West Ham, though, held on for a victory that left it 11th in the Premier League with 37 points and effectively banished all fears of relegation for Sam Allardyce’s men.

Sunderland remained second from the bottom on 25 points, four points from safety with eight matches left to play.

“Scoring against Sunderland is a special feeling, but the three points for the team are more important,” Carroll told Sky Sports television.

“All the lads are positive about staying up and I think we should be safe now.”

Poyet was disappointed referee Howard Webb did not award the first-half penalty. “The idea for us now is not to give up,” he said. “We still have a chance and we’re going to keep going until the end.”