A first retrospective of Shirin Neshat in Seoul

A first retrospective of Shirin Neshat in Seoul

Above: A still from the film “Women Without Men” (2009). Right: “Rebellious Silence” (1994) from the photo series “Women of Allah.” Both are part of the retrospective of Iranian artist Shirin Neshat, going on now at MMCA Seoul. Provided by the artist and Gladstone Gallery New York and Brussels

For the first exhibition of 2014, the National Museum of Modern and Contemporary Art Seoul, or MMCA Seoul, has chosen Shirin Neshat, a Middle Eastern artist who is virtually unknown in Korea despite her brilliant reputation internationally.

Neshat, 57, is a New York-based Iranian artist and film director who largely uses photography and video to talk about the complicated conditions and identities of Muslim women around the world.

Her retrospective, which started in the museum yesterday, features about 50 works, including two photography series - the early series “Women of Allah” (1993-97), which brought fame to the artist, and the photographic installation “The Book of Kings” (2012). 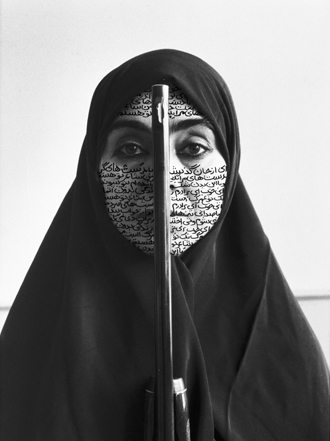 “Shirin Neshat’s work is deeply rooted in her experience as an artist in exile and her Iranian roots,” the museum said in a statement.

“Her work explores the political and social conditions of Iranian and Muslim culture, particularly focusing on gender and questions of power, displacement and paradox.”

The museum also quoted the artist: “My art has stemmed from a desire to bridge deeply personal issues with critical social, political and historical issues that concern the worlds I inhabit.

“Whether through the medium of photography, video installations or feature films, all of my work tends to investigate various dichotomies, including masculine and feminine; mystical and political; poetry and violence; and finally, personal angst with social crisis.”

Neshat won top prizes for her work at the 1999 Venice Biennale and the 2000 Gwangju Biennale.

In addition, her film “Women Without Men” won her the Silver Lion for best director at the 2009 Venice Film Festival. The film, about four women living in Iran in 1953 when the Shah returned to power, will be shown in a theater on the basement floor of the museum during the exhibition period.

There are also video installations related with the film.

The museum is open Tuesday to Sunday from 10 a.m. to 6 p.m., with the closing time extended to 9 p.m. on Wednesdays and Saturdays. The museum is a 10-minute walk from Anguk Station, line No. 3, exit No. 1.