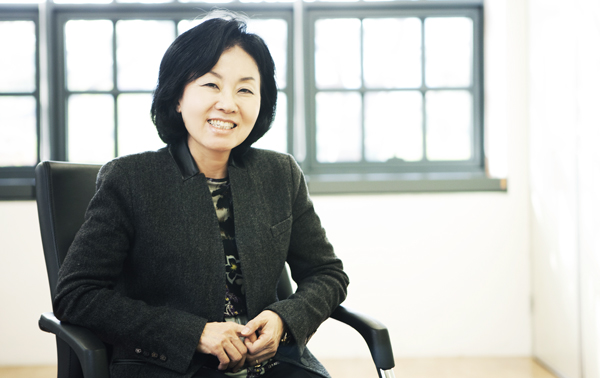 Chung Hyung-min, director of the National Museum of Modern and Contemporary Art. Provided by the museum

Four and half months have passed since the opening of the National Museum of Modern and Contemporary Art’s new Seoul branch, or MMCA Seoul, and the museum already seems to have been accepted as “an open museum familiar with the public” as it intended.

In the museum’s courtyards, which link its web of low-rise buildings, people stop and take pictures or just rest on their way to the famous old neighborhoods that surround the museum, like Gyeongbok Palace, Samcheong-dong and Bukchon. The museum’s cafes are also crowded.

However, some critics remain, suspecting that only a few visit the museum’s exhibitions compared to the throngs that flock to its cafes, shops and gardens. How would the head of MMCA, Chung Hyung-min, respond to those critics?

“The daily number of visitors to MMCA Seoul’s exhibitions is 2,500 on weekdays and 4,000 on weekends on average - successful numbers,” she said in an interview with the Korea JoongAng Daily at the Seoul branch late last month.

“And what’s the problem if many people just drop by the museum for a cup of coffee? That doesn’t go against our intention - to make the museum as part of ordinary people’s daily lives.”

Chung, 62, took her position as the director of the state-run museum in January 2012. Her two-year term was supposed to expire in January, but it was extended by the government for another year. Here are some excerpts from the interview.

Q. Isn’t the Seoul branch taking viewers away from the Gwacheon branch?

A. Many people were afraid of that, but the result is quite the opposite. The daily attendance of MMCA Gwacheon has increased by 1.5 to 1.7 times from before the Seoul branch opened. Perhaps the opening of MMCA Seoul renewed the public’s recognition that the Gwacheon branch also exists. Our shuttle bus that links the two, as well as the Deoksu Palace branch, has helped it.

In addition, the Gwacheon museum has some distinctive characteristics from the Seoul branch. For one, it has a large sculpture garden that appeals to families with children. And the museum building, although built 40 years ago, has many exciting spaces yet to be fully used.

You made good use of the Gwacheon museum’s circular rooms for some 2013 exhibitions, like “Bill Viola from the Museum Collection” and “Dream Walking in the Magical Reality.” Those shows turned the rooms into a kind of amphitheater for fantastic moving images.

A museum’s identity comes from its collection, so it is important for a museum to constantly show its collection in various arrangements, under different creative concepts. I have focused on that since I took office.

While researching the MMCA collection, I realized that architectural archives, crafts and industrial designs among the collection were as important as works of fine art. So I opened permanent exhibition rooms for these fields one by one in the Gwacheon branch. The move also came from the intention to differentiate the museum from the Seoul branch, which will focus on cutting-edge, contemporary fine art.

To make creative exhibitions with the museum’s limited collections, the curators’ ability is important. But it is widely known that the working conditions of curators in Korea are not very good. The national museum seems to be no exception. What do you think?

As a government organization, we can hire a certain number of workers as determined by the Ministry of Security and Public Administration. With the Seoul branch opening, we were given a quota of 40 new officials. All of them, except one engineer, including 18 curators, are on one-year contracts.

What can they do within just one year? Research and planning exhibitions cannot be done within one year. Of course, their contracts can be renewed, but you know that it is very difficult to make big, long-term plans if your contract might not be renewed after a year.

Wages are also an important part of working conditions, but the stability of the position is the most important thing for curators to research well and make good exhibitions. I’m concerned about that.

Will the problems be solved if the museum is changed from a branch of the government to a state-run corporation as proposed?

Well, you know, a bill for the change has been pending in the National Assembly [since 2010 before Chung took office]. If the museum turns into a corporation, it could help new workers have more stability, but the existing workers in the museum who are regular government officials would face an ambiguous situation and some of them would have to return to the central government.

Anyway, in the long run, a change into a corporation will help the museum be more competitive as it would be freed from various regulations and allow curators to focus more on the number of viewers, leading them to plan higher-quality and more exciting exhibitions.

But such a change should be bolstered by the museum’s financial independence. We established a foundation last July to operate the art shops and parking lots without the help of government support. Fortunately, we are in the black as of now. But the art exhibitions are still financed by the government.

We are also making efforts to actively attract more corporate support, just as foreign museums do. As part of that, Hyundai Motor Group agreed to donate 12 billion won [$11.3 million] over the next 10 years to the MMCA, including 9 billion won for annual solo exhibitions by middle-aged artists who are considered to be able to lead the global art scene.