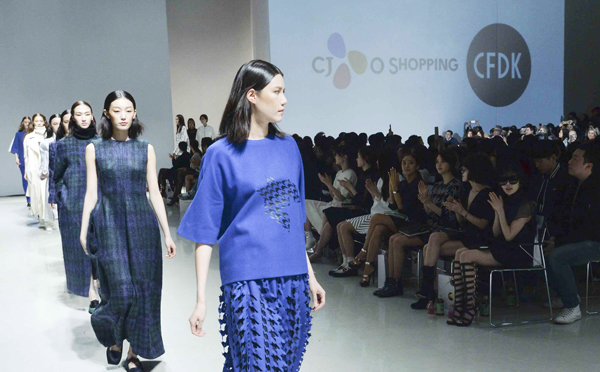 When Ko Tae-yong, the up-and-coming fashion designer behind the menswear label Beyond Closet, began to sell clothes on a home shopping channel four years ago, some of his fellow designers tried to dissuade him.

“Some people said it wasn’t a proper platform for selling designer clothes,” said the 33-year-old, who founded his label seven years ago.

At the time, home shopping channels were often considered a place for cheap and shoddy products, such as a set of three wrinkle-free pants for 39,000 won ($36). But Ko decided to be practical, realizing that his young firm needed more revenue.

He eventually started designing clothes just for home shopping channels, offering a sweatshirt with an adorable applique of beagles. A sweatshirt in his original collection can go for upward of 300,000 won, but for TV he made a cheaper version and sold it for less than 100,000 won.

It was a gamble that quickly paid off. “I could sell up to 10,000 jackets in a couple of minutes,” said Ko.

Despite selling on TV, Ko’s reputation as a fashion designer didn’t get tarnished at all. His regular collections still sell well both in Korea and abroad. His most recent collaboration, sneakers he made with Reebok called Ex-O-Fit, was shown during New York Fashion Week in February. Reebok also sponsored a fashion show for Ko in New York, a rare opportunity for an individual designer.

In fact, CJ has signed deals with 23 designers this year to produce special brands just for its channel, while GS Homeshopping, another major player in home shopping, also has about the same number of designers.

Those collaborations have quickly paid off for the industry. In 2010 and 2011, 20 percent of GS and CJ’s revenue came from selling clothes, but fashion sales neared 30 percent of revenue last year for both companies. CJ’s home shopping channel, for example, took in 3.7 trillion won in sales last year, with 1.1 trillion won coming from clothes.

Unlike most other products, clothes have high profit margins and they are constantly in demand, thanks to the constantly changing seasons.

“Some designer brands can sell 100 million won worth of clothes per minute,” said Choi Hye-rim, a public relations official at CJ. 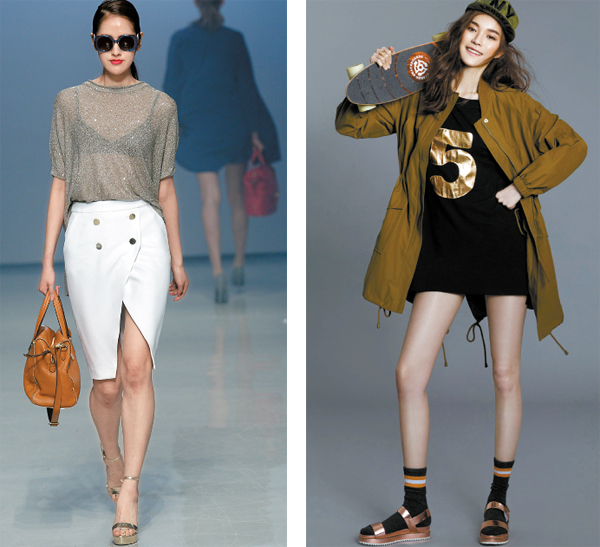 SJ Wani, left, is the home shopping brand of Son Jung Wan. Push and Gun, right, is the second brand of PushButton. Image of SJ Wani is provided by GS Homeshopping and Push and Gun by CJ O Shopping

GS and CJ are now serious about their fashion businesses, and both staged their own fashion shows with their design partners during the 2014 fall/winter Seoul Fashion Week that came to an end last week.

Other home shopping channels like Lotte and Hyundai are also trying to recruit designers.

But while the rise of TV-designer partnerships is a definite boon for the fashion industry, it also speaks to the unique hardships struggling designers face in their home market.

Many insiders in the fashion industry agree that Korea is a tough market for designers.

While department stores in North America and Europe buy products directly from designers, most designers in Korea need to sell on consignment, with the retailer taking a commission of between 30 and 35 percent. Few companies can offer to open their own shops in Seoul’s expensive real estate market, especially in the fashionable parts of downtown, and designers can’t afford to pay those hefty commissions.

“I see more Korean designers who are willing to work in China because it is really hard to survive in Korea, given its structural problems,” wrote fashion designer Kim Hyung-chul in a local newspaper last month.

In addition, Korea’s distribution system relies on department stores because they are the only way to build brand recognition.

“It’s quite funny that the nation’s distribution revolves around department stores,” said Kim Mun-young, a professor of fashion marketing at Keimyung University. “If a designer brand doesn’t have a shop inside a department store, customers don’t trust the brand.”

The advent of multilabel shops in the mid-2000s somewhat opened sales channels, but not nearly enough for most.

For example, the talented and promising designers Steve Jung and Yoni Pai, the duo behind the label Steve J & Yoni P, have humorous collections of menswear and womenswear that always capture the attention of the press and the public, but that’s not enough to turn a profit.

“Now we have more multilabel shops, but you can’t really make money by selling clothes there,” said Pai. “In order to grow our brand into a national brand, we have to open shops at department stores. But the last designer brand to do that was Andy & Debb, which was more than 10 years ago.”
Because of this, many designer brands prefer to be acquired by conglomerates like Samsung Everland and Kolon Industries. Womenswear brand Jardin de Chouette, shoe brand Suecomma Bonnie and bag brand Couronne were all taken over by Kolon, allowing the founding designers to continue as creative directors. Couronne, example, started with a small store in Cheongdam-dong, southeast Seoul, in 2009, but now it has about 60 shops across the nation. 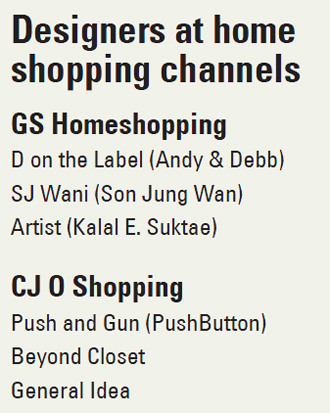 From hangers to streets

Launching second brands for home shopping channels means more for many designers than just making money. It’s also a good way of spreading awareness of a brand and reducing costs.

“As a designer, I always have the desire to make quality clothes with reasonable prices, but I couldn’t even dare to think about it when I worked by myself,” said Hong Hye-jin, the designer behind the womenswear label The Studio K. “But as I began to make clothes in large quantities, I could source quality fabrics, like down feathers or cashmere.”

That is probably the reason why Andy & Debb, which has 16 stores nationwide in department stores, launched its second label with GS last year.

Kan Ho-sup, a professor of textile art and fashion design at Hongik University, is like many in the industry who are ambivalent about the role of conglomerates and home shopping networks in fashion.

“Fashion is art, but it has to be on the street. Designers have to do business and sell their clothes,” said Kan. “In department stores, Korean designer brands get pushed aside by foreign brands and the number of people who can afford to purchase designer clothes are really small.”

“So you are stuck in the middle where it’s getting harder and harder by the day to promote yourself.”

Which is why many fashion experts welcome the collaboration with home shopping channels.

“Designers have to find a happy medium between art and business,” said Kan. “And it’s good for these home shopping channels. They can’t rely on selling sets of 39,000 won wrinkle-free pants forever.”