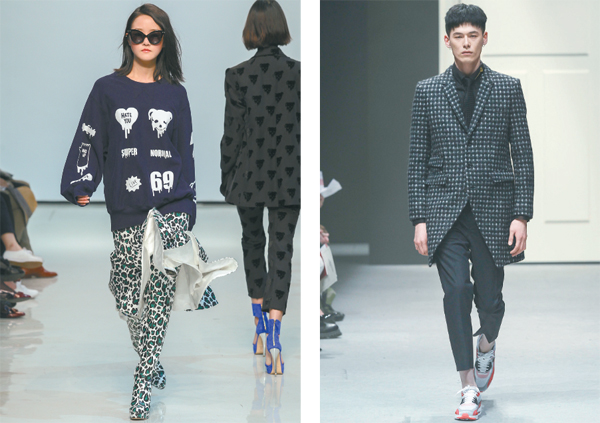 The 2014 fall/winter Seoul Fashion Week came to an end on March 26 at the newly opened Dongdaemun Design Plaza in central Seoul.

Fifty-seven designer brands took to the runways, be they established labels like Jinteok and Andy & Debb, up-and-comers like pushButton and CY Choi, or rookies like Kye and J Koo. In addition, 17 brands were invited to Generation Next, a platform for budding designers.

Now in its 14th year, Seoul Fashion Week used to be held in different venues, with buyers and the press shuttling between two locations and often missing some of the shows.

This year, however, the spacious and futuristic plaza won plenty of compliments from the designers.

“I know there are many controversies with this building, but I’m really proud as a designer that we can do the show at this beautiful building,” said Hong Hye-jin, founder of the womenswear label The Studio K.

The latest fashion week also had more buyers from Hong Kong and China, perhaps because of the popularity of Korean dramas such as “My Love From the Star.”

“Asian buyers accounted for 78 percent of the invited buyers for this season, slightly up from the previous season when they were 72 percent,” said Lee Hyun-ju, an official at the Seoul Design Foundation.

“This time I met many buyers especially from China,” said Lee, a regular attendee for Seoul Fashion Week.

Lee noted that the Seoul shows offer something different than most in Asia. “They are fun,” Lee added.

Lee said he purchased items from the collections of Steve J & Yoni P and pushButton.

For the coming season, pushButton created another signature print by turning teddy bears into playful and sinisterly gothic creatures, while Steve J & Yoni P twisted camouflage prints by adding floral designs to them.

Korean menswear, which is highly acclaimed by fashion industry experts, presented classical looks in a variety of styles, with a military theme appearing frequently.

CY Choi, whose collections are famous for clean cuts and quality tailoring, used the theme of “beautiful soldiers,” while Beyond Closet had the idea of a last military leave. Dominic’s Way and J Koo also used military elements.

If there was a major criticism with the fashion week, it was the chaos of the venue, as the Seoul Design Foundation sold way too many tickets to the public.