The two-face play of Shinzo Abe

The two-face play of Shinzo Abe 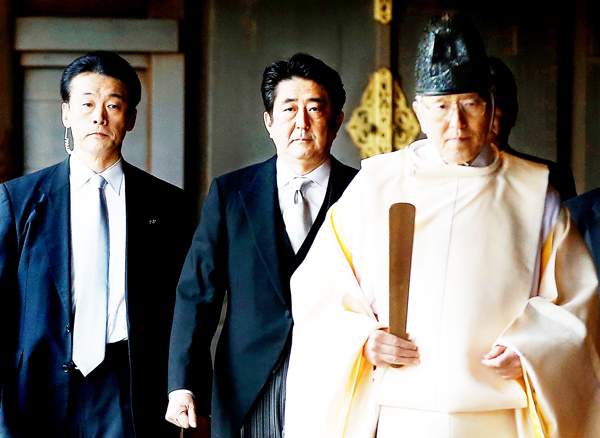 “For their positions, they both have no reason to have a meeting. They want for nothing,” a Japanese reporter said over a drink in late February.

A month after the conversation, the two heads of states met in The Hague on the sidelines of the Nuclear Security Summit in the Netherlands. They didn’t change their minds, but attended the meeting because of mediation by U.S. President Barack Obama. Korea couldn’t turn down President Obama’s request since he has agreed to visit Korea in April following his trip to Japan.

But as if Korea and Japan had arranged the meeting together, the scene in the background of the summit was quite unnatural. At the Upper House Budget Committee meeting televised live on NHK, Prime Minister Abe said he was not considering a revision of the 1993 Kono Statement, which admitted to and effectively apologized for the Japanese government’s forceful recruitment of women and girls to be used as sex slaves for Japanese soldiers during World War II. Knowing Abe’s remark was lacking sincerity, however, the Korean government used it as a justification for a meeting with him. As a pretentious gesture, Japan also postponed the approval of rightist textbooks from late March to early April. While it was only moved back a week, some Korean government officials seem to have overly appreciated Japan’s “consideration.”

The highlight of the meeting was President Park’s stern face as Abe greeted her in Korean: “It is very nice to meet you, President Park Geun-hye.”

I replayed that comical scene over and over. Japanese media also made a fuss. They juxtaposed Park’s smiling face as she shook hands with Abe ahead of the meeting with her stiff expression during the meeting. They also argued her expressions were intentional, as she was worried about the Korean public’s unfavorable sentiments toward Japan.

But even if Japan’s claim is true to some degree, it was Abe who started the two-face play first. He conspicuously visited the Yasukuni Shrine, where Class-A war criminals are enshrined, but claimed Korea and China were responsible for stalled communication, arguing that he was willing to talk. President Obama had expressed disappointment toward Japan, and Abe greeted Park in Korean in front of President Obama.

In late April, President Obama is to visit Japan and Korea, and a high-level meeting between Korea and Japan on the comfort women issue is scheduled in mid-April. Japan is also asking to discuss the Takeshima (Dokdo) issue together, which Korea cannot accept. It seems that Tokyo is not very eager to meet in the first place. Personally, I believe that even as you are acting or playing or pretending, it is better to expand understanding unless you will never meet again. What do you think?