Eagles soar, then get reality check

Eagles soar, then get reality check 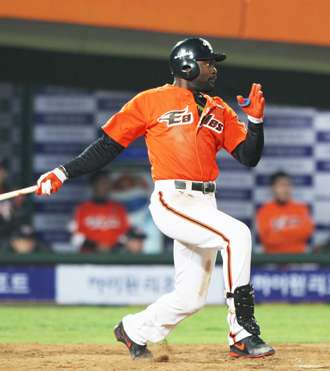 Felix Pie of the Hanwha Eagles connects against the Lotte Giants on Monday at Sajik Stadium in Busan. By Yang Gwang-sam

At Sunday’s 4-2 win against the Lotte Giants at Sajik Stadium in Busan, fans of the Daejeon-based Hanwha Eagles enjoyed their team’s first season-opening victory since 2009.

New foreign starting pitcher Caleb Clay picked up the win, allowing two runs in five and two-thirds innings on five hits, including a home run, and two walks while striking out two.

The victory temporarily boosted the postseason hopes of the Eagles, the KBO’s biggest spender in the offseason at more than 13.7 billion won ($12.8 million).

However, in Monday’s game, which was postponed from Saturday due to rain, the Eagles looked more like the 2013 team.

The bullpen got no help from the infield, whose shoddy defense recalled the Eagles’ typical pattern of losing in the past.

Hanwha allowed six runs in the sixth and ended up losing, 11-2.

On the plus side, the top of the order showed marked improvement on Sunday. Leadoff man Lee singled and No. 2 Jung walked in the top of the second to load the bases before Pie drove in two runs with a two-out single.

In top of the fourth, Pie singled to left field with two outs and then stole second. Cleanup hitter Kim Tae-kyun drove him in with a double to left-center field.

All three runs were scored with two outs.

If the Sunday game gave Eagles fans reason to dream, the Monday game was a reality check.

After Giants catcher Kang Min-ho tied the game with a two-run homer, the bullpen and defense fell apart.

With runners on first and third and one out in the bottom of the sixth, shortstop Song Kwang-min booted an easy ground ball off the bat of Jung Hoon to give the Giants another run.

Reliever Yoon Kyu-jin then walked Choi Jun-suk on a wild pitch, which allowed another Giants run. Yoon and fellow reliever Yoon Ki-ho allowed three more runs on four hits and a walk in the bottom of the seventh, and Song also made another error later in the game.

“The huge investment on free agents and foreign players certainly has upgraded the team for sure,” said analyst Lee Yong-chul. “But it also puts a lot more pressure on the players to win more games this season. Frankly, the Eagles aren’t a team that should advance to the postseason, though it is too early to say. One thing that manager Kim Euong-yong needs to do is to get the team to concentrate on picking up wins once they have a lead in a game.”

“Manager Kim said the team could go to the postseason, which might happen if everything goes well, but one thing they really need to do is develop a winning mentality in their players over the next couple of seasons by picking up more wins,” added Lee. “From that process, players will learn how to win more games, and they will not rush or struggle in crucial game situations. They will play with more confidence.”

The investment the Eagles made in the offseason must be a foundation for them to be competitive in the league for the next four to five years.