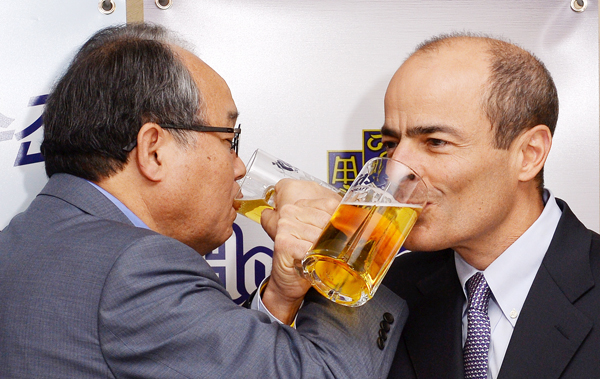 Carlos Brito, right, CEO of Anheuser-Busch InBev, and Chang In-soo, CEO of Oriental Brewery, drink a toast to celebrate the reunion of the two breweries at the Westin Chosun Hotel in central Seoul. [NEWSIS]

In 2009, AB InBev agreed to sell OB with the option of reacquiring the company within five years. By selling the Korean brewer back, KKR and Affinity earned more than 3.8 trillion won.

Brito said that current OB CEO Chang will stay on in his position and that the corporate name will not change.

The OB deal follows the global brewer’s recent acquisitions of leading brewers in countries like Brazil and Mexico. AB InBev entered the Korean market by acquiring OB in 1998, at the time rejecting any suggestion that it might resell the Korean brewer.

“We’re here to stay. Whatever happened five years ago, it was an exception,” Brito said yesterday. “It was a very difficult decision to sell OB in 2009. We always wanted to return to South Korea. It was a natural step to come back here.”

However, the company explained that it was fair.

Brito cited the global financial crisis as the main reason for the low selling price five years ago, adding that OB has experienced tremendous growth since then.

OB regarded the reunion with AB InBev as welcome support and an opportunity to enhance the overall quality of its products.

Officials from OB expect tough competition this year from Lotte Liquor and Hite-Jinro, which have also released new brands for sporting events because of the World Cup and the Incheon Asian Games.

“For OB, today is a historic day. The reunion will provide huge support, synergizing both companies,” said Chang. “Through this opportunity, we will start a beer Hallyu [Korean Wave].”

Brito added that AB InBev plans to make Korea a stronghold of the company’s Asia-Pacific market because OB’s Cass brand, which currently has a 40 percent share of the domestic beer market, has plenty of room to go global.

Doukeris mentioned the possibility of bringing OB to the Chinese market. He said it was too early in the process to discuss specifics but that the matter is under serious consideration.

OB currently has a capacity of 14 million liters (3.08 million gallons) per year with its three breweries in Korea. AB InBev will continue to invest in the Korean market to expand existing production facilities in Cheonan and Icheon, Gyeonggi, to meet increasing demand for beer this summer.

Brito explained that he hopes to strengthen AB InBev’s presence in Asia through the reacquisition, with OB becoming a significant player across the continent.

He added that as much as Korea is an attractive market, the joint company will become a strong contributor to the growth of the Korean economy and community by assisting in the export of OB beer brands to more markets where AB InBev currently does business. He also hoped the reunion will give Korean beer lovers wider access to the AB InBev’s other brands that are highly popular here, such as Corona, Budweiser and Hoegaarden.

AB InBev is the world’s largest brewer and the fifth-largest producer of consumer products, with sales of $43.2 billion last year.

The conglomerate has its headquarters in Belgium and branches in 25 countries.

The company operates through exports and cooperation with local brewers such as OB.

The world beer giant has Asian branches in China, India, Vietnam and Korea.

Other branches are based in European countries, the United States, Mexico, Brazil and Argentina.