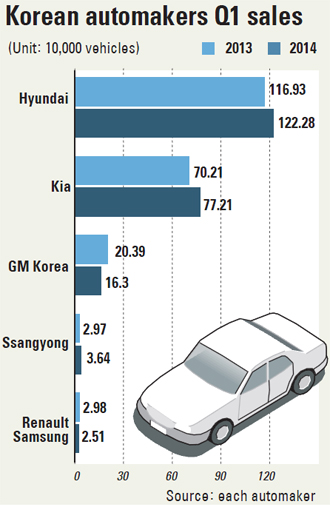 Five local automakers totaled nearly 2.22 million vehicle sales worldwide in the first quarter, up 4 percent from a year ago, according to data released by the companies, some of which struggled in exports.

In domestic sales, Korean automakers saw a 4.2 percent year-on-year increase after selling 334,673 units in the January to March period.

However, Kia Motors, the nation’s second-largest automaker, was the only company that reported a drop in domestic sales in the first quarter. Sales fell 0.6 percent to 108,005 units, largely due to a slump in January when it sold 2,000 units less than in 2013.

Hyundai Motor, the nation’s largest automaker, showed a 4.5 percent year-on-year increase to 160,717 units sold domestically thanks to sales of sport utility vehicles and new models like the second-generation Genesis and Grandeur Hybrid.

GM Korea, the nation’s third-largest automaker, marked its best first-quarter performance domestically since 2004 after 34,335 vehicles were sold, an increase of 4.1 percent from the same period last year.

“GM Korea strengthened its presence in the domestic market during the first quarter this year, despite not having the Damas and Labo in our lineup,” said Marc Comeau, GM Korea vice president of Vehicle Sales, Service and Marketing.

Ssangyong Motor, now owned by India’s Mahindra, had the biggest sales increase of 26.4 percent after selling 16,797 units in the January to March period, while Renault Samsung Motors (RSM) saw a 16.8 percent year-on-year increase to 14,909.

Overseas, Korean automakers sold 1.88 million vehicles total, up 3.9 percent from a year ago, despite major drops for GM Korea and RSM.

The sales slump of GM Korea and RSM was made up for by Korea’s two largest automakers. Hyundai’s overseas sales jumped 4.6 percent year-on-year to 1.06 million units, while its affiliate, Kia, soared 11.9 percent to 664,193 units in the first quarter.