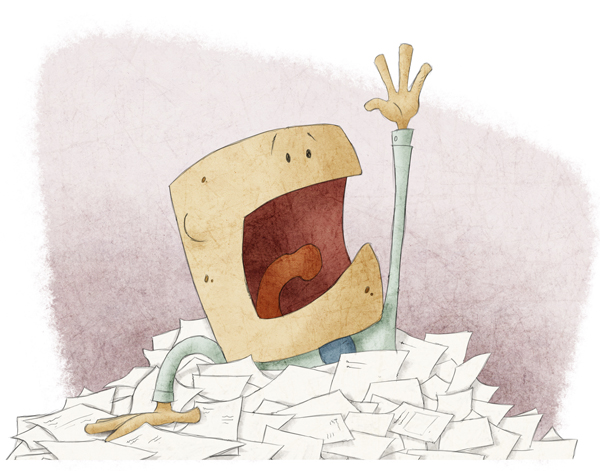 Korean workers employed at foreign companies are the most depressed employees, even more so than employees of local conglomerates and state-run companies, largely due to impersonal relationships with co-workers and excessive workloads.

Of the 942 workers surveyed by employment website Job Korea, 80.5 percent said they become depressed and lethargic every morning when they arrive at work. Among those who answered yes, 82.1 percent are employed at branches of foreign companies in Korea. That figure was higher than for workers employed by Korean conglomerates (81.7 percent) and state-run companies (80.6 percent). The survey allowed multiple answers.

Unlike people working at Korean companies, who said their jobs caused them stress because they were concerned about their future and job stability, those employed by foreign companies said that they felt stress when senior workers gave them too much work and had unreasonably high expectations.

The survey results are ironic because many first-time job seekers consider foreign companies their top choice because of good benefits and a horizontal corporate culture.

At Google Korea, for example, engineers are allowed to use up to 20 percent of their working hours for personal projects unrelated to their daily job tasks. The company explained that the flexible policy allows employees to be more creative and possibly generate new sources of profit.

“It is true that some large foreign companies like Google offer flexibility in performance expectations and horizontal organizational culture,” said Jung Joo-hee, a spokesperson for Job Korea.

“But not all of them are Google; big and affluent enough to afford such flexibility. They are just companies that have to pursue profit, just as much as Korean companies do.” 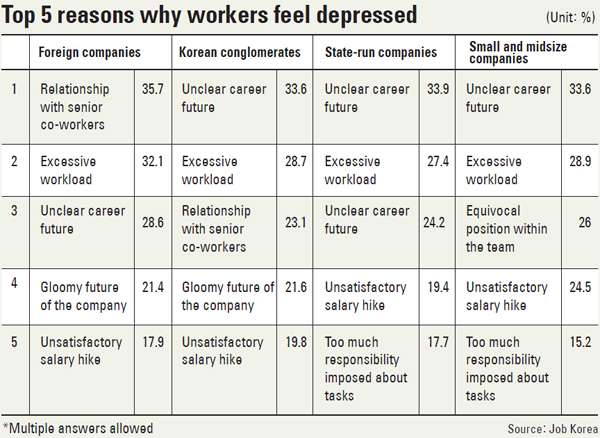 Industry insiders explained that Western corporate culture, in which senior workers do not interfere with junior workers or give them advice unless they cause problems, works as a double-edged sword. It creates a parallel workplace organization, and at the same time makes junior workers, who grew up in Korean culture, feel detached.

“In Korean corporate culture, senior workers become a guardian when a junior first joins the team,” Jung said. “Even though they nitpick or scold the juniors .?.?. the seniors have the intention to guide them to learn job tasks more efficiently and to help them become part of the team quickly.”

She explained that the absence of such guidance, which puts full responsibility for a task on a junior worker, may make Koreans feel even more pressured and isolated.

Lim, a department head at an international trade company in his 50s who took the job eight years ago after working at Korean companies for two decades, said he initially struggled with Western corporate culture.

“During my early years at this company, I was often baffled by organizational shuffles because the company headquarters based in the United States dispatched this young man in his 30s as a CEO,” Lim said. “Evaluations that completely disregard years of experience were somewhat difficult to accept as a member of the older generation.”

However, he said young workers should overcome such difficulties by being open minded, accepting differences in corporate culture and enjoying the creativity.

According to the Job Korea survey, 46.4 percent of respondents said they are considering quitting work as a solution to the stress, while 37.2 percent said they would share the stress with friends and family.

But almost 30 percent said they just endure the stress.

“For many workers, the easiest solution to avoiding such stress is to quit their current job. However, one should be careful not to make an impulsive choice, because quitting may have a significant impact on his or her career,” said Choi Chang-ho, vice president of Job Korea.

“They should stop thinking to themselves. They should not hesitate to talk to senior workers directly about the distribution of tasks, performance evaluation or any problems within the team.”