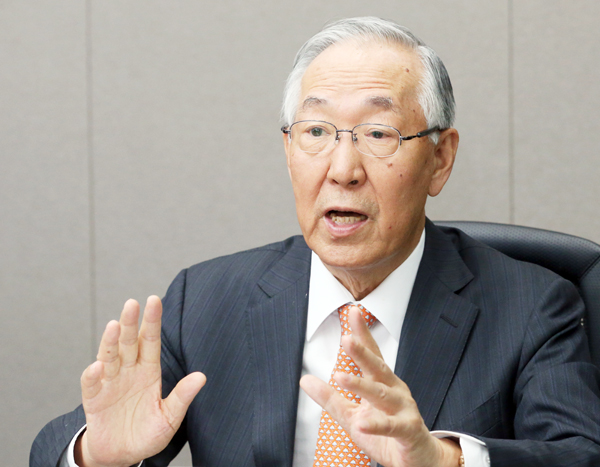 The 73-year-old, who will publish a new book this month detailing his experiences as a top trade negotiator, says that Korea’s status as a trading nation is a development that took decades and proves the country’s competitiveness.

At the beginning of his career, Kim wasn’t a trade expert at all, but he had experience in international relations from his college days. He received a degree in political science from Tufts University in 1964 and pursued graduate studies at the University of Massachusetts where he earned a doctorate in political science. He subsequently taught at Smith College and St. Lawrence University.

But after coming back to Korea, Kim joined the Ministry of Trade, Industry and Energy and began to build a career as a trade expert. In his capacity as assistant minister, a position he held from 1984 to 1990, Kim served as the chief international trade negotiator for Korea.

From 1987 to 1990, Kim chaired the Uruguay Round Negotiation Group on multilateral trade negotiation agreements. In 1991, he was appointed president of the Korea Trade Promotion Corporation.

Rising through the ranks, Kim eventually became Minister of Trade, Industry and Energy in February 1993. In December 1994, he was appointed ambassador for international trade before serving as a deputy director general for the World Trade Organization (WTO).

After ending his four-year term with the WTO, he taught at Sejong University and was the school’s president from 2001 to 2005.

Since then, Kim has been head of the Institute for Trade and Investment at Lee International IP and Law Group, where he continues to raise future talents.

Q. What is your most memorable negotiation?

A. The negotiation with the United States in 1989 that was about selecting priority foreign countries based on its Super 301. Under Section 301 of the Trade Act of 1974, the United States that time tried to pick Korea as an unfair trading country, but we tried to negotiate and emphasized that Korea is actually not that kind of country. What was more difficult was negotiating with other ministries within our government. The critical point was to open the agriculture market and free investment, and we advanced our trade relationship with the United States by finishing negotiation without big yields.

How do you recall the Uruguay Round (UR) negotiations?

It was a multilateral trade negotiation that the General Agreement on Tariffs and Trade (GATT), the predecessor of the WTO, started during its Uruguay meeting by calling for new world trade pacts. Amid negotiations over the controversy of opening markets, we saw two prime ministers and three agriculture ministers resign from their posts. It was very difficult to open doors for trading rice, but the achievement was that Koreans raised varied points of view on the UR and accepted it positively. It was result of the government persuading people by promoting the many trade advantages in store for Korea.

At that time, there were negative views of opening trading doors to the world. How did you manage that?

It was thought that it is better to have more exports and less imports. For this reason, Korea was recognized by the world as a country with mercantilism. As Korea marked a trade surplus in the mid ’80s, this view became more firm. I tried to focus on explaining to people and policy makers that without solving trade problems, there will not be economic growth. But it was difficult because people’s thoughts can’t change in a day. I even received criticism that I’m a traitor. However, I didn’t stop persuading them. Even persuading my own ministry wasn’t easy since the industry section and trade section had different points of view.

What made you think Korea should go forward as a trading nation?

I had a thought that “competitiveness comes from competition.” Korea is a country that can’t lead if it is closing doors on the world. If Korea stayed behind the tide of globalization, the country would be damaged, so I thought we need to pursue policies to open doors and go forward.

Why did you decide to run for director general of the WTO?

At that time, no one imagined that a Korean could be a leader of the WTO. After the UR ended, the WTO was founded and, in January 1991, New Zealand’s trade minister visited Korea and asked us to support him as a WTO director general. Then our foreign ministry thought, ‘Why can’t a Korean take that position?’ So Han Seung-joo, then minister of foreign affairs, asked me to run for the position, so I accepted. It was also the era during which former President Kim Young-sam emphasized globalization and pushed Koreans to an international stage, which also influenced my decision. As I entered the election, there were powerful candidates like former Mexican President Carlos Salinas, but with support from some 30 countries from Asia and the Middle East, I was able to rise as a competitive candidate. Honestly, I didn’t expect to win, but I thought it was meaningful for a Korean to go for a director-general position at an international organization.

What was most memorable about working for the WTO?

Through my four-year stint at the WTO as a deputy director general, the biggest issue was about China gaining WTO membership.

At the last phase of negotiations which has been ongoing for 15 years since the GATT era, I entered as a deputy director general. I feel proud that China is obeying the rules and conditions of the WTO since it gained membership.

Today, as regional negotiations like free trade agreements (FTAs) are becoming more frequent, some people point out that the WTO, which tries to bind the entire world in one trade rule, is becoming useless. How do you see that?

It is true that FTAs are becoming more active as the WTO’s negotiation of new trade rules gets sluggish. However, to have complete free trade, multi-track or bilateral track negotiations involving both the FTA and WTO should be pursued. Particularly the trade blocking situation in the world could be overcome only by the WTO. It is not easy to make decisions because some 160 members need to come up with an agreement in the WTO, but I expect positive results in the near future after the WTO Ministerial Conference in Bali in December made some progress. But the task will be changing the WTO’s single-undertaking decision-making system, which means they must negotiate until all small issues are resolved.

I think Korea made a late decision to review joining the TPP. It could enter TPP negotiations now, which are almost at the final phase, or have a separate negotiation for membership after the TPP negotiation is done. Both are situations that leave Korea in a difficult position to earn beneficial conditions.

What’s your advice to young people who wish to become a trade negotiation expert?

First, you need to have good foreign language skills and global knowledge. In the negotiation, it is important to know about your counter representative. I still have a habit of bringing a briefcase with me because I always brought documents to my home to know more about my negotiation partner. You know what to say if you can perfectly understand the situation that your partner is in.