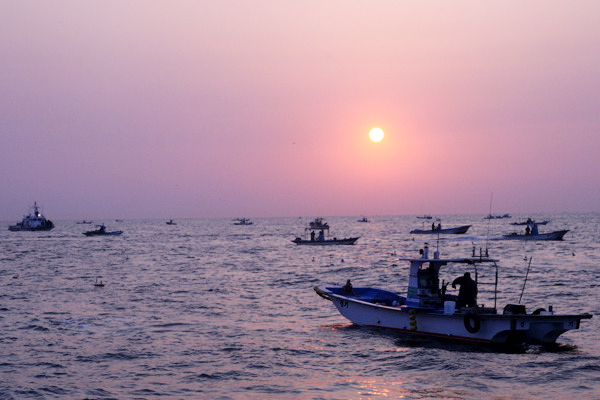 As North Korea appears ready to fire missiles into the East Sea, 125 fishing boats from Goseong County, Gangwon, sail out to fish near the Northern Limit Line in the East Sea yesterday morning. Yesterday was the first day this year that boats were permitted to fish in the area. [NEWS1]

North Korea told its ships to avoid the waters near Wonsan, a coastal city off the East Sea, between Monday and April 4, raising concerns of more missile launches following live-fire exercises in the Yellow Sea on Monday, Seoul officials said yesterday.

Officials from the South Korean military told reporters yesterday that it learned through intelligence that Pyongyang warned vessels to avoid the sea near Wonsan, the type of notification it has made in the past to protect private vessels.

But North Korea did not give any similar notification to the International Maritime Organization.

In December 2012, Pyongyang did inform that organization of its plan to launch a long-range Unha-3 ballistic missile.

Some weapons not seen recently near the East Sea have been spotted by South Korea, officials said, such as a missile transporter-erector-launcher (TEL), a mobile missile launcher.

On March 26, the North fired two medium-range missiles, assumed by South Korea to be Rodong missiles, from a launch site in Wonsan.

On Monday, the North fired some 500 shells from artillery and rocket launchers toward South Korean waters in the Yellow Sea. Around 100 rounds landed south of the Northern Limit Line, the de facto sea border, around Baengnyeong Island.

“Although North Korea withdrew all the weapons it used for the live-fire drills on Monday right after the exercises in the Yellow Sea,” an official said, “we detected some moves of a missile launch near the East Sea.”

South Korea’s military does not rule out the possibility of an attack in the ocean or on land, another government official in Seoul said.

Since Pyongyang has deployed artillery and missiles at a training field near Mirim Airport in Pyongyang since mid-March, officials are also wary of a large-scale military provocation, possibly around the time of U.S. President Barack Obama’s visit to Seoul this month.

“North Korea has carried out a series of drills by deploying various kinds of weapons recently,” a military official said. “Although they have only threatened South Korea and Japan so far, they could now use other weapons targeting the United States.”

Possible weapons targeting Washington could be a long-range missile with a range of more than 2,800 kilometers (1,740 miles), officials said.

On Sunday, North Korea’s Foreign Ministry warned in a statement that it will conduct “a new form of nuclear test,” implying a fourth underground nuclear test following tests in 2006, 2009 and 2013.

Experts wonder whether a “new form” of test signifies a device made from uranium rather than plutonium. The first two tests were confirmed by specialists as plutonium bombs. The type used in the February 2013 test has not been confirmed.

“The provocation that the North Koreans have, once again, engaged in is dangerous and it needs to stop,” he said at a briefing on Monday. “And obviously, when I’m in China, that will be a subject that I will discuss with my counterpart in China.” Hagel will visit China next week.

In the meantime, South Korean military said Monday that Pyongyang has recently tacitly recognized the Northern Limit Line as the maritime border with the South.

In a fax message sent to the South Korean 2nd Navy Fleet Command on Monday morning, Pyongyang pinpointed seven spots where their artillery shells were expected to land, all of them above the NLL.

But some 100 shells landed below the NLL, all near South Korea’s Baengnyeong Island.

As of yesterday, Pyongyang did not refute claims by the South Korean military that it violated the NLL.

The disputed maritime border in the Yellow Sea was unilaterally drawn by the U.S.-led UN Command after the end of the 1950-53 Korean War.

In 1959, North Korea also marked the NLL in its annual defense yearbook as the effective maritime boundary in the Yellow Sea.

But, starting in the 1970s, Pyongyang has challenged the line and its patrol ships have crossed it more than 500 times, according to the South Korean military.

“Since North Korea announced a new western border unilaterally drawn up by itself in 1999, they have tried to nullify the NLL,” a South Korean military official said. “But recently, they seem to recognize the NLL as a real boundary.”