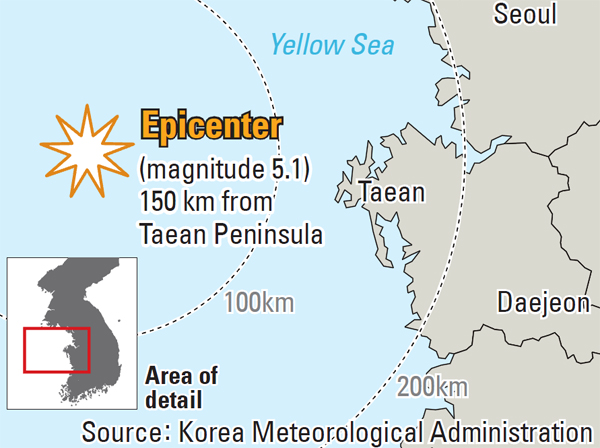 A magnitude 5.1 earthquake struck the Taean County area in the western part of Korea yesterday, though no serious injuries or property damage have so far been reported.

The quake, the fourth-strongest in the country since 1978, occurred around 4:48 a.m. about 100 kilometers (62.1 miles) northwest of the West Gyeongnyeolbi Archipelago off Taean, according to the Daejeon Meteorological Office. The tremor was felt in Taean, South Chungcheong, as well as in areas of Gyeonggi and Seoul. Seismologists from the agency said that the epicenter, where the earthquake began, is located 36.95 degrees parallel north, though the exact cause has yet to be determined. Earthquakes with magnitudes above 5 have the capacity to demolish poorly built structures, the meteorological office said. A series of aftershocks with magnitudes between 2 and 3 were recorded at 9:25 a.m. near the Taean area.

“We expect more aftershocks to come,” a representative of the Korea Meteorological Administration said. “But aftershocks are mostly smaller in magnitude than the initial earthquake, so we don’t think they will cause serious damage.”

The Korea Meteorological Administration added that reports about the quake primarily concerned the shaking of homes and other buildings. It was the fourth-strongest earthquake to shake the Korean Peninsula since seismic records were kept in 1978.

The other comparable quakes include two magnitude 5.2 earthquakes that jolted areas near Mount Songni, North Chungcheong, in 1978, and in waters east of Uljin, North Gyeongsang, in 2004. A magnitude-5.3 quake that hit Uiju in North Korea’s North Pyongan Province in 1978 is also among the strongest.