Suicide factors laid out in report

Suicide factors laid out in report 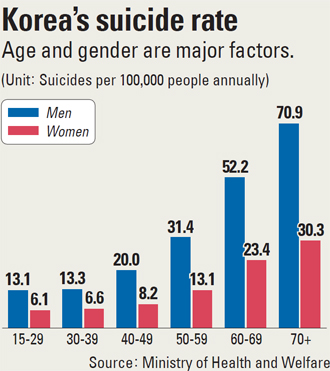 Korea’s suicide rate far outpaces those of its counterparts in the Organization for Economic Cooperation and Development (OECD), according to recent data. About 29.1 out of every 100,000 Koreans commit suicide each year, a figure that is more than double the average among OECD members at 12.5.

In an effort to determine the reasons for such a high rate, the Ministry of Health and Welfare yesterday released a report on suicide for 2013.

It is the first research conducted by the ministry that explores the factors and motivations that contribute to suicide in Korea.

Demographic factors seemed obvious when the ministry analyzed 8,305 suicide victims listed in health insurance statistics who died between 1992 and 2011. Across all age groups, the suicide rate for men was more than double that for women, with the likelihood tending to increase as they get older. Those with lower education or income levels appeared to be more susceptible to suicide.

“In cases in foreign countries, the suicide rate for men is more than double that for women, and different research provides a number of reasons,” said Ahn Yong-min, a professor at the College of Medicine of Seoul National University. “In Korea, the majority of men who commit suicide are middle aged or older, but the suicide rate for women stays high even among the young. We can say women are taking their own lives when they have trouble with interpersonal relationships, while middle-aged and older men are more pressured by social or economic difficulty or diseases.”

Notably, the ministry’s report also found that those who previously attempted suicide were 25 times more likely to take their own lives eventually. Out of 8,848 people who were taken to emergency rooms after suicide attempts from 2007 to 2011, 236 people were found to have killed themselves by the end of 2012.

The suicide rate for those who previously attempted to kill themselves equated to about 700 people for every 100,000 ­- a rate 25 times higher than that for those who had not.

The report also suggested that medical expenses for psychiatric help for suicide victims increased by more than 50 percent in the 10 to 12 months before they committed suicide.

The ministry’s research team also conducted a “psychological autopsy” of 72 suicide victims, analyzing their suicide notes and interviewing their families in depth.

Based on those findings, researchers were able to divide the victims into four different categories based on their motivations for taking their own lives: Those who committed suicide due to acute stress; chronic stress; mental disorders; and those who had previously expressed a will to commit suicide.

The category with mental disorders as the primary reason accounted for the highest number of victims with 22 cases, or 28.6 percent. A similar result was observed when the research team interviewed 2,277 people who visited the emergency rooms of 17 large hospitals across the country following suicide attempts last year. When asked the reason why they tried to take their own lives, 37.9 percent cited “psychiatric symptoms, such as depression,” followed by 31.2 percent citing “stress from personal relations.”

The Ministry of Health and Welfare said that, based on the results of the report, it will finalize comprehensive measures for suicide prevention by the end of this year.