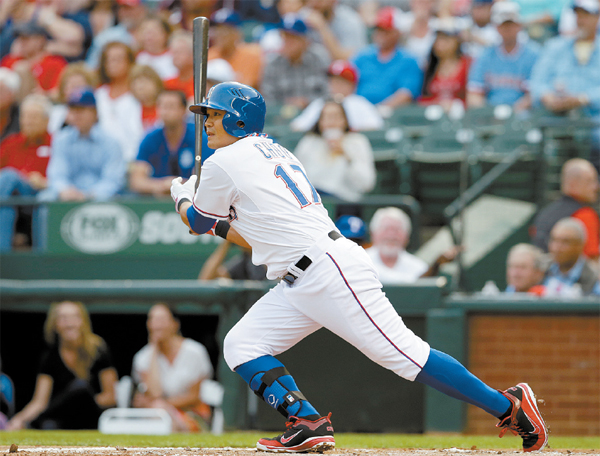 Texas Rangers’ Choo Shin-soo follows through on a single to center field off Philadelphia’s A.J. Burnett in the first inning of a game Tuesday in Arlington, Texas. [AP/NEWSIS]

After going hitless in his debut with the Texas Rangers, Choo Shin-soo showed why the team spent $130 million signing him during the offseason, by reaching base four times and scoring the tying and winning runs in a 3-2 victory over the Philadelphia Phillies.

Choo lived up to his reputation as an on-base machine by collecting two hits and a walk, as well as being hit by a pitch in the game on Tuesday, local time.

In the seventh, Choo singled to left field against Phillies lefty Jake Diekman, then scored on a double by cleanup hitter Adrian Beltre to tie the game at 2-2.

Choo and Beltre struck again in the bottom of the ninth. Choo drew a leadoff walk and advanced to second on a sacrifice bunt by shortstop Elvis Andrus, before Beltre brought him home with a walk-off single to right field for the Rangers’ first win. Beltre went two for four with two RBIs and a walk.

“I’m happy for the team’s victory tonight,” Choo told Korean media after the game. “I think I did pretty much everything I could do for the team. Since this three-game series is now tied, we will try our best to make this a winning series.”

“He [Choo] set the tone of the game,” said manager Ron Washington. “Without him, we would have not been able to score the last two runs.” Local media outlets, including the Dallas Morning News, complimented Choo’s performance, reporting that the 30-year-old native of Busan led the team’s offense by reaching bases four times. “Choo showed exactly what the Rangers wanted to see from him,” the newspaper reported.

Right-hander Joakim Soria pitched a scoreless top of the ninth to pick up the win, while Phillies lefty Mario Hollands took the loss.

Rangers starter Martin Perez gave up three singles through the first five innings while striking out seven of the first 17 hitters he faced.

“It was nice to get that win coming from behind and now the chance to win the series,’’ said Beltre.

“The 500 tickets we secured were sold out within 10 days,” said a spokesman for News Korea, which caters to Koreans in Dallas.

About 85,000 Koreans live in Dallas, the second-largest Korean population in the United States after Los Angeles.

The Rangers have connected with local Korean communities as part of their business promotions for Choo, offering $21 discounts on tickets priced at $51 and giving away T-shirts with Choo’s No. 17 on the back to the first 15,000 fans coming to the ballpark April 15.