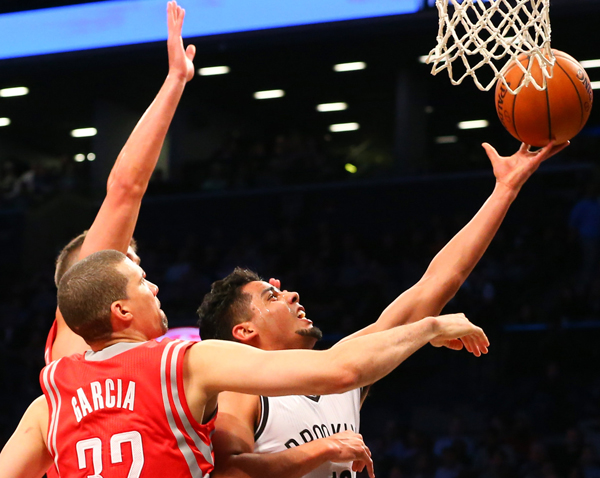 The Brooklyn Nets are so good at home now that even the Houston Rockets can’t beat them. The Nets clinched a playoff berth by beating the Rockets at home for the first time in 11 years, getting 32 points from Joe Johnson in a 105-96 victory on Tuesday night.

Shaun Livingston added 17 points for the Nets, who extended their home winning streak to 14 games, their longest ever and tops in the league this season. They finished 18-12 overall against the Western Conference.

“We’ve just been playing and trying to protect home court. They came in here and we try to send them on their way with a loss, and that’s for everybody,’’ Livingston said. “It just happens to be we’ve been playing good basketball against the West.’’

The Nets ended a 14-game skid against Houston with their first victory in the series since March 13, 2006. The Nets hadn’t defeated the Rockets at home since March 31, 2003, when they were playing in East Rutherford, New Jersey. The Nets also pulled within one and a half games of Toronto and Chicago for the No. 3 seed in the East and home-court advantage in the first round, quite a change for a team that started 10-21.

James Harden scored 26 points for Houston, which lost its second straight following a five-game winning streak. Still without Dwight Howard because of a sore left ankle, the Rockets shot just 38 percent from the field.

“We just missed some shots, missed some opportunities,’’ Harden said of the Rockets, also without starters Patrick Beverley and Terrence Jones. “We let them get too comfortable early in the game. They got it going and it was tough.’’

Harden was 16 of 16 from the free-throw line. Omer Asik had 12 points and a career-high 23 rebounds while starting for Howard, while Jeremy Lin and Chandler Parsons each added 16 points.