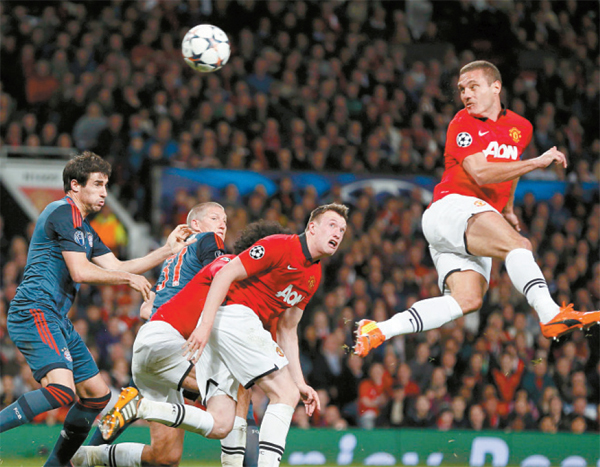 Holders Bayern Munich were held to a 1-1 draw at a resilient Manchester United on Tuesday but remain favorites to clinch their Champions League quarter-final despite losing Bastian Schweinsteiger to a red card.

Bayern played the last few minutes at Old Trafford with 10 men after Schweinsteiger, who scored their equalizer in the 67th minute, got a second booking for tripping Wayne Rooney, ruling him out of next Wednesday’s second leg at the Allianz Arena.

“Congratulations to the team,” Bayern coach Pep Guardiola told reporters. “I am satisfied because Manchester United is one of the best teams in the world and that is something we should not forget.

“The away goal is extremely important even though the 1-1 can be tricky. We will try to win the return leg and I have full confidence in my players,” added the Spaniard whose team is still on track to repeat the treble they claimed last season.

United’s performance was in stark contrast to recent 3-0 home defeats by arch-rivals Liverpool and Manchester City in a lackluster Premier League campaign.

Although the draw ended United’s run of four straight Champions League home wins this season, it was a huge improvement on much of their domestic league form which has left them stranded in seventh place.

Manager David Moyes, who has endured a tough baptism this season after taking over from the retired Alex Ferguson, had said his main wish was to have a foothold in the tie going into the second leg and that he was encouraged by United’s performance.

“I was really pleased with the way we played. There was a great atmosphere, a great crowd, it was really gutsy,” he told ITV Sport.

“There was a real determination tonight to make sure we did well. It’s a competition we have a really good history in, and we played a really good side tonight.”

With Schweinsteiger and defender Javi Martinez now suspended for the return, Moyes was asked if he had more belief in winning next week against a side who retained their domestic title with seven matches left and are in the German Cup semi-finals.

“Well we have to score a goal because if the score stays as it is, Bayern goes through and we have to do something about it.

“We said we wanted to go into the second leg with a real chance and we have done that. We have given ourselves a real opportunity. We will go to Munich and try to get a victory.”

Bayern had won their last four matches on English soil in the last 13 months, including two wins at Arsenal, a victory at Manchester City and success in last season’s Champions League final when they beat Borussia Dortmund at Wembley.

After a scare when United’s Danny Welbeck saw a goal ruled out after five minutes for raising his foot too high, Bayern looked capable of extending that winning run, and taking their overall Champions League away record to eight successive wins.