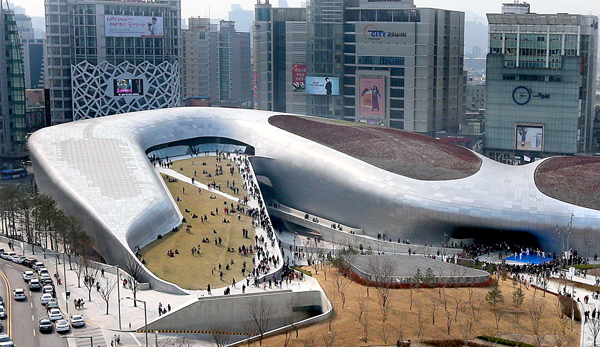 Are we really in Seoul?

Last week, dozens of bloggers and photographers were taking pictures of a woman in a miniskirt with 8-inch heels, a man in an emerald green suit and a girl in a long, flowery coat sweeping the floor. That scene, which used to be exclusive to the world’s fashion capitals of London and Paris, could be witnessed at the Dongdaemun Design Plaza (DDP) during Seoul Fashion Week, held at the DDP from March 21 to 26.

However, those photogenic fashionistas weren’t buyers, reporters or fashion industry insiders; they were part of the general public interested in fashion. As if they were waiting for their chance on the runway, they showed off their sense of fashion and turned the street into an outdoor fashion show.

Just as I was considering taking out my camera, a young woman in her 20s caught my attention. She was wearing a miniskirt with fishnet stockings, a small top and a jacket. She was one of the favorites there. “I have been photographed several times today,” she said. “It’s true that my fashion is quite showy today. I am majoring in fashion, so I wanted to see if my sense of fashion was good enough. I designed the skirt I am wearing now. Who knows? Maybe my name could be in a magazine.”

Previous fashion weeks drew similar crowds, but not as big as this time. Seoul Fashion Week was previously held in Setec in Daechi-dong, Olympic Park, the War Memorial in Yongsan District and the International Finance Center in Yeouido. But they were too far from downtown, too small and too unfashionable. The futuristic DDP, set on a spacious plaza, blew away all the concerns and provided the perfect stage.

Before the DDP opened, it drew a fair amount of criticism. Some said it was too big, didn’t go well with the surroundings or failed to highlight any historical significance. Aside from its architectural aspects, people were also concerned about its operation. The public worried that if it wasn’t filled with substantial content, it would turn into a wasteful expense, and that if it was rented out for profit, the quality of the exhibitions wouldn’t be guaranteed.

But it doesn’t have to be “filled” with exhibitions, performances or events. It doesn’t have to be planned and prepared. When the setting is provided, urban culture is often spontaneously created or born through interactions. The street performances in Hongdae and the flea market in Itaewon-dong were created by the young, talented Koreans and resident foreigners. Now that the DDP provides a venue, it could also have great results. “Dream, Design, Play” is the catchphrase of the DDP. Its content could very well come into the world spontaneously.

*The author is a reporter of the JoongAng Sunday.