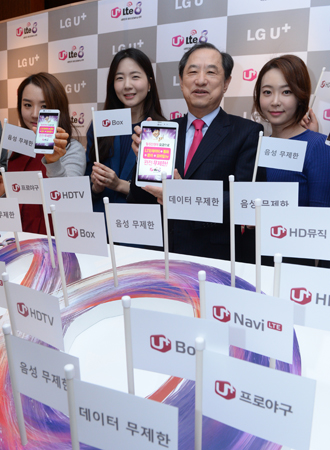 LG U Vice Chairman Lee Sang-cheol, second from right, announcing the launch of the country’s first unlimited LTE service during a press event yesterday. Provided by the company

LG U+ yesterday launched the nation’s first unlimited mobile service package, a move was echoed later in the day by SK Telecom and KT, which both announced that they would offer a similar service.

The move follows a massive business suspension imposed on the nation’s top three mobile operators for offering excessive subsidies, and some observers say it may put an end to the era in which operators compete to offer the best discounts.

A variety of LTE plans referred to as “unlimited LTE” have been offered in the past by the three mobile carriers, but none of those plans actually provided unlimited LTE data service.

“It is now time that all three mobile carriers must break away from the extreme subsidy competition,” Lee said. “LG U+ plans to lead the paradigm shift in the competition to provide more benefits to customers.”

As part of the new plan offered by LG U+, when data usage exceeds 2 gigabytes a day, the LTE speed will be limited to 3 megabits per second. It said that users should be able to save around 90,000 won a month.

“Even if the speed is limited to 3 megabits per second, there is absolutely no problem watching high-definition videos,” Vice Chairman Lee said. “We’re only limiting the speed to counter the possibility that some might commercially exploit the service.”

Half an hour into the press conference held by LG U+, No. 1 mobile carrier SK Telecom announced its own LTE unlimited plan, upgrading the existing LTE unlimited 75 Plus package, LTE unlimited 85 and LTE unlimited 100. Subscribers to those existing plans will automatically receive the benefits of the new LTE data plan.

The price is also slightly cheaper than that of LG U+, as subscribers of a 24-month contract can get the unlimited LTE data plan for 61,250 won.

LG U+ vice chairman Lee and the company’s managing directors expressed frustration during the press briefing at the unexpected launch of SK Telecom’s unlimited data plan. “SK Telecom’s move does not conform to trading ethics. We have been preparing for this product since three months ago and finally launched it at a press conference. SK Telecom had absolutely no plan until yesterday and came up with the plan in 30 minutes only to throw cold waters on our efforts,” said Lee.