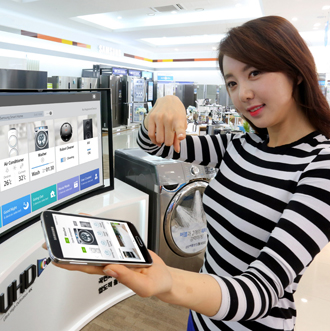 Samsung Electronics yesterday launched its Smart Home service, as the world’s largest smartphone vendor zeroes in on the growth potential of the nascent convergence service.

According to the company, saying “good night” to a smartphone will turn off all connected devices.

All smartphones running versions higher than the Android 4.0 operating system are compatible with Smart Home. Wearable devices such as smartwatches and smart wristbands also can be used in addition to smartphones, the company said.

Samsung plans to roll out its Gear 2 smartwatch and Gear Fit wristband this month.

The Tizen operating system, which Samsung developed with Intel and other companies and is used in the Gear 2, also is able to control the Samsung Smart Home service.

Samsung Smart TV will also be used as a controller of Samsung Smart Home service beginning later this year, the company said.

Samsung is among a host of electronic companies that unveiled smart home services during recent IT fairs, including the International Consumer Electronics Show in Las Vegas in January, but it claims its service is the most comprehensive one available so far.

According to Navigant Research, the smart home electronic appliance market will grow 48 percent annually from $2.15 billion in 2013 to $34 billion in 2020.

“We are excited that the launch of Samsung Smart Home makes the connected home a reality today and allows our customers to live a smarter life,” said Hong Won-pyo, president and head of the Media Solution Center at Samsung Electronics.

“Samsung Smart Home lets people live better, worry less and be smarter with their devices and appliances. We also have grand plans to enhance more and more parts of the home experience, especially with a view of expanding it to areas with high growth potential, such as home safety and energy management.”

The service was launched in Korea and the United States, and nine other countries including the United Kingdom will be added this year.

Samsung plans to expand its service lineup to other smart products, including the Smart Bulb as well as robot vacuum cleaners.

Smart Home is available only with Samsung appliances.