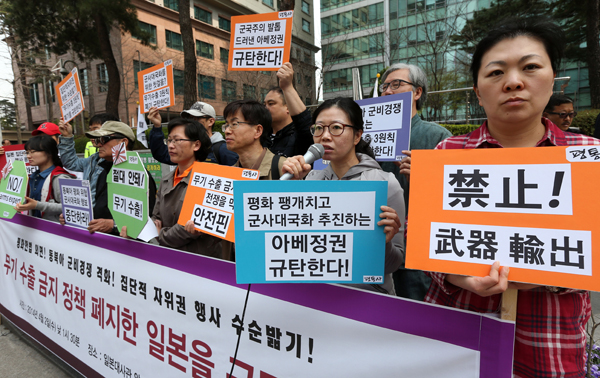 The Solidarity for Peace and Reunification of Korea, a civilian group, rally in front of the Japanese Embassy in Seoul yesterday to protest Japan’s lifting of its decades-long weapons export ban. The ban strictly prohibited the export of weapons and military hardware. [NEWS1]

A senior Japanese opposition lawmaker raised concern Tuesday at a seminar in Washington that Prime Minister Shinzo Abe may backtrack on his promise to uphold past apologies to the women who were forced into sexual slavery by the Japanese military during World War II.

Abe indicated for the first time at an upper house budget committee meeting on March 14 that he upheld the statement, stating he had “no plans to revise” the address made in 1993 by then-Chief Cabinet Secretary Yohei Kono, which effectively apologized for the Japanese Imperial Army’s forceful recruitment of women into military brothels during World War II.

However, Seoul has expressed skepticism over his sincerity. Abe previously said he would issue a new “forward-looking” statement in 2015, the 70th anniversary of the end of World War II, which has raised concern from observers here that he may backtrack on the 1993 Kono Statement or the 1995 Murayama Statement.

The Japanese prime minister’s visit last December to the Yasukuni Shrine, which enshrines Japan’s war dead, including World War II war criminals, was criticized here and abroad as an insensitive act that denied his country’s imperialist past.

It is natural that the new statement, expected to be announced next year on Aug. 15, “will attract international attention, because it is an opportunity for the Japanese government to express its position on the war,” Eda said, addressing a seminar that was attended by other upper house lawmakers at George Washington University.

Abe’s recognition of historical issues and the perspective of the Japanese mainstream “are not connected,” Eda said, “especially Prime Minister Abe’s visit to the Yasukuni Shrine, which not only brought about criticism from neighbors such as China and North and South Korea, but from the international community as well.”

Eda, a former minister of justice and environment, was the first opposition member to serve as president of the House of Councillors, the upper house of the National Diet, in 2007.

He said Japan has to keep in mind the 1951 San Francisco Peace Treaty, which officially ended World War II. In it, Japan agreed to recognize the judgments of the International Military Tribunal for the Far East.