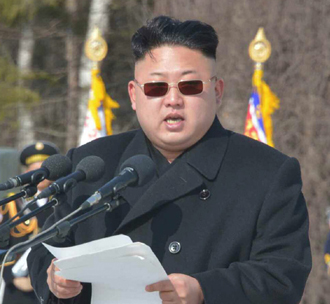 Kim read out his statement at a meeting with military commanders of the North Korean Army in Yanggang Province on Tuesday, saying that “the circumstances in the country are very grave,” the regime’s official mouthpiece, the Rodong Sinmun, reported yesterday.

Kim was pictured wearing sunglasses, which is unusual.

He added that the “U.S. and its hostile followers are economically isolating, militarily choking off and politically annihilating” North Korea, and he pledged to retaliate by “crushing down the hostile polices of the United States.”

The provocative comments came as tensions on the Korean Peninsula rose after a series of military provocations by Pyongyang, including the shelling and a nuclear weapons test, and amid ongoing joint military drills in South Korean territory by U.S. and South Korean forces.

The two Koreas traded artillery fire on Monday after North Korea fired 500 artillery and rocket shells at the disputed inter-Korean sea border as part of live-fire exercises in the Yellow Sea. About 100 of the shells landed in South Korean waters, leading the Southern military to return fire.

The skirmish on Monday followed recent missile tests by the regime, including two medium-range missiles assumed by South Korea to be Rodong missiles. On Sunday, North Korea’s Foreign Ministry warned in a statement that it will conduct “a new form of nuclear test,” implying a fourth underground nuclear test following tests in 2006, 2009 and 2013.

Experts wonder whether a “new form” of test signifies a device made from uranium rather than plutonium.

After reunions of 1950-53 Korean War-separated families were held in North Korea in February, inter-Korean relations soured.

Pyongyang has protested the South Korea-U.S. joint military drills, Key Resolve and Foal Eagle, which started in late February, describing them as a “war rehearsal.” The allies say they are defensive in nature.

According to South Korea’s Defense Ministry, which released photos and information about the exercises to reporters on March 31, this year’s drills are the largest since Seoul and Washington started the amphibious exercises in 1993.

A total of 9,500 U.S. troops and 3,000 South Korean soldiers have been mobilized as well as 22 V-22 Osprey, a multimission tilt-rotor aircraft. Capable of vertical landings and takeoffs and equipped with the functionality of a helicopter, there were only four V-22 Ospreys dispatched to last year’s drills, according to Seoul.

The Rodong Sinmun yesterday showed the private jet of Kim Jong-un, releasing a photo of the leader walking down the stairs of the plane.

Authorities in Seoul told the JoongAng Ilbo that the jet appeared to be a remodeled version of a TU-204, designed by the Russian manufacturer Tupolev.

“Unlike his father, who was known to have a fear of flying, Kim Jong-un was alleged to use his own jet,” a Seoul official said. “Although we traced his moves in a jet through satellite images before, this was the first time the North Korean media revealed his plane.”