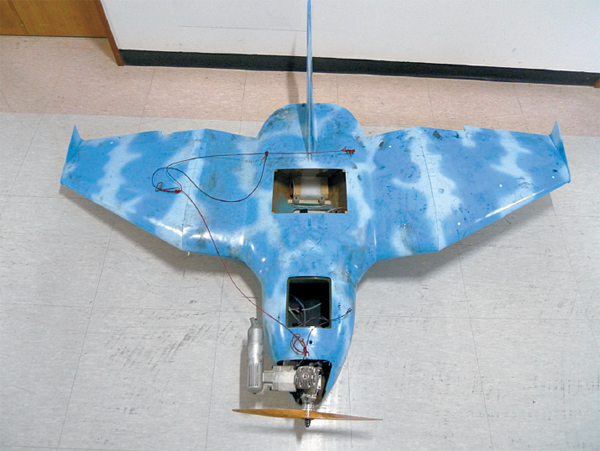 An unmanned drone that was found last week in Paju, a South Korean city near the land border with North Korea. The South Korean government suspects the drone was sent by North Korea to spy on the Blue House. [AP/NEWSIS]

South Korea has tentatively concluded that two drones equipped with digital cameras that crashed in different locations in the past 10 days were North Korean.

The Blue House said yesterday it is attempting to come up with measures to better detect small drones, including the introduction of a radar designed to detect craft flying at low altitudes.

“Although the final results of the probe have yet to come out, the National Security Council is conducting the probe based on the premise [the drones] were sent by North Korea,” said Min Kyung-wook, a Blue House spokesman, in a briefing yesterday.

“When the joint investigation is finalized, the Ministry of National Defense, the Joint Chiefs of Staff, the Capital Defense Command and other related government institutions are expected to hold a meeting to come up with countermeasures against small-sized unmanned aerial vehicles,” Min said, “even those that do not originate from North Korea.”

The remarks came two days after an unmanned aerial vehicle, or UAV, equipped with a digital camera was discovered after crashing on Baengnyeong Island in the Yellow Sea. It was found the same day the two Koreas exchanged artillery fire across their disputed maritime border.

Another UAV with a digital camera was found March 24, a week earlier, in the border town of Paju, Gyeonggi, northwest of Seoul and just south of the demilitarized zone, or DMZ.

“Analysis of the UAVs shows the two bear similarities and are deemed to have been produced by the same method,” said a military source. “We have concluded they were developed and produced by North Korea to monitor South Korea’s key government institutions and military authorities.”

The source added that North Korea, which has very low aerial reconnaissance capabilities, appears to have developed the drones to shoot aerial photographs. But he refused to disclose the resolution level of the photographs taken by the two drones for security reasons.

They were previously reported to be of poor quality, but one of the investigators told the JoongAng Ilbo that the drone found in Paju had a Canon 550D DSLR camera with a high-capacity 18-megapixel wide-angle lens that costs around 1 million won ($946).

The first drone found, according to the investigator, took 190 photographs. When it entered the Paju area it took a photograph every eight seconds, but the interval appears to have been programmed to speed up to as fast as one photo every second as it approached the Blue House. The drone moved south from Paju along Route No. 1, a key route if North Korea ever invaded South Korea, to reach central Seoul. After shooting the vicinity of the Blue House, the drone flew back to Paju for about 100 minutes before crashing.

The camera found in the drone that crashed on Baengnyeong Island took some 50 photographs of Army units on the northwestern coast of South Korea.

Other details about the drones have emerged. The surface of the lithium-ion battery of the drone found in Paju is inscribed with Korean words signifying the start date of usage. The spelling was based on North Korean romanization rules. South Korea writes naljja for “date,” but North Korea uses nalja.

Both aircraft were sky blue with decorations of white clouds. The drone found in Paju was formed to resemble a stealth aircraft, while the other resembles a regular plane.

Neither of them were remotely controlled. Both were equipped with aviation controllers that made it possible for them to return on their own. They had parachutes for landing. Ordinary UAVs with nonmilitary purposes have wheels.

America’s NBC TV reported Monday that the UAV discovered on Baengnyeong Island “looks like it has had a modified fuselage and been fitted with a camera - imagine a model airplane with a camera. It seems to have some of the characteristics of other North Korean drones we know about.” As a source it cited Joseph S. Bermudez Jr., co-founder of the Colorado-based intelligence contractor All Source Analysis.

Paul Schulte, a visiting senior research fellow in the department of war studies at London’s Kings College, said: “The aircraft is so small that it looks as though it could not have flown from anywhere else [other than North Korea] - that is unless it is from South Korea and they haven’t identified it, but that is less likely.”

North Korea is known to operate several types of UAVs. The first model introduced in the late 1990s was the VR-3 Reys, an eight-meter-long reconnaissance drone made by the Russian aerospace and defense company Tupolev. Its range stretched up to 90 kilometers.

The North also has the 2.78-meter Pchela-1T, manufactured by the Russian Yakovlev Design Bureau, for surveillance and observation in battlefields with a range of 60 kilometers. There are also two types of larger remotely piloted vehicles (RPVs) based on China’s D-4.

Two years ago the North was reported to be developing unmanned attack aircraft based on the MQM-107D Streaker, a U.S. target drone.

According to South Korean intelligence sources, the North has conducted tests on high-speed drones fitted with high explosives but failed to master the technology. That raised speculation that North Korea could someday deploy the aircraft near the inter-Korean border to target South Korean troops stationed on border islands in the Yellow Sea.

Inspired by the first Gulf War in 1991, South Korea started developing its own UAV Songgolmae in 1993. The 4.8-meter-long aircraft model named RQ-101, which is capable of flying at a maximum speed of 185 kilometers per hour for as long as six hours with a range of 110 kilometers, was put into service in 2002.