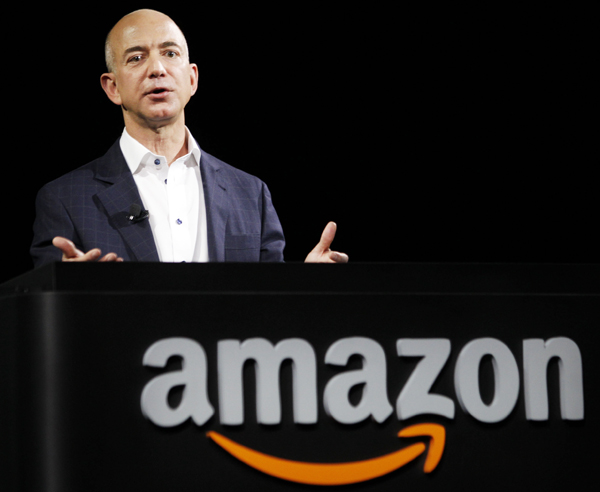 Jeff Bezos, chief executive officer of Amazon.com, introduces the Kindle Fire HD tablets at a news conference in Santa Monica, California, in 2012. Over time, his company’s competitive advantage has shifted from its technology to its physical infrastructure. [BLOOMBERG]

Over the past several years, Amazon.com has been rolling out lockers in major urban areas where people who aren’t around to pick up packages during the day can get their packages shipped. Now, the Wall Street Journal reports that those lockers will become a two-way service: If you can’t wait around for a United Parcel Service pickup, you’ll be able to deposit your package in a locker instead.

This is obviously good news for Amazon customers in big cities. It’s also a sign of an ongoing transformation in Amazon’s business model: from what is basically a technology company to something a lot more like a traditional retail business. Obviously, Amazon remains both. But over time, its competitive advantage has shifted from its technology to its physical infrastructure.

To see what I mean, compare old-economy companies with the lions of the dot-com era. Old-economy companies gained their competitive advantage from things such as intellectual property, brands, physical locations and economies of scale: General Motors could produce cars cheaper than upstart competitors could because it already had the factories, and it could amortize the cost of development and production tooling across its millions of customers.

Dot-com companies were insanely valuable because of what economists call “network effects.” Think of a fax machine: The first fax machine is basically useless. The second one is valuable, because now you can send documents to someone. Each additional fax machine purchased by someone else makes your fax machine more valuable. So, too, with Facebook: The more people you know who are on it, the more likely you are to join as well.

In its early days, Amazon benefited from economies of scale - it could have giant warehouses instead of fully staffed bookstores that were often quite empty. But it also benefited from network effects, in the form of customer reviews, wish lists and so forth. The more people who used Amazon, the more valuable its services became, because you had more information about the products: not just how good the products were, but which of your friends wanted them as gifts, and which related products you might like based on your own ratings.

These benefits made it harder for people to leave Amazon for two reasons: Upstarts wouldn’t be able to match the deep network information, and even if they could switching networks meant losing all your customized content and connections to other users.

These things are still a competitive advantage for Amazon. But more and more, its competitive advantage comes from more traditional sources, such as a locker network close to the user. When I spoke to Amazon a year ago for a big feature on retail, the most impressive fact I gleaned was not anything to do with its technology or merchandising; it was that the company can site and build a new warehouse in less than a year. Which it has been doing a lot in recent years, bringing its product closer and closer to end users in order to reduce delivery times and shipping costs. That’s what my old professor Jim Schrager used to call a “geography” strategy - the same strategy employed by every gas station and convenience store.

This is not necessarily bad news for Amazon. The downside of network strategies is that as soon as the network starts to decay, it’s vulnerable to collapse: Facebook will always operate with the specter of Friendster hanging over it. Having its competitive advantage rest more in the physical proximity of its warehouses and lockers to users actually makes Amazon more resilient in the face of competition.

But it also introduces some long-term vulnerabilities. As I noted in that retail piece, retail is always at least in part a geography strategy - and every retailer that gets in trouble gets in trouble the same way, when sales fall and the leases that used to be their greatest assets turn into millstones.

As John Maynard Keynes once noted, in the long run, we’re all dead, including companies. But the long run can be way off - and in the meantime, getting more physical could help Amazon make a whole lot of money.

*The author is a Bloomberg View columnist who writes on economics, business and public policy.