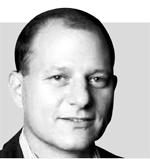 Last week, the Buffalo Bills lost their long-time owner, Ralph Wilson. This week, a potential buyer surfaced. His name - you may recognize it - is Donald Trump.

Trump told WBEN radio that he had been approached by a group of investors who are interested in purchasing the team, and that he intended to “look at” the possibility. He also mentioned that former Bills quarterback Jim Kelly is a “good friend,” and that if he were in charge, he would keep the team in Buffalo. (Wilson had long vowed never to move it, but now all bets are off. Buffalo is America’s 51st-largest television market, which doesn’t exactly bode well for a modern NFL franchise.)

We know this game, of course. Trump always says “maybe” before he says “no.” We stopped believing him years ago when he said he was considering running for this or that political office - currently, governor of New York or perhaps president (again). So we shouldn’t make too much of reports suggesting he might throw his hat into the NFL arena - presuming he can even afford a sizable investment in an NFL franchise valued at around $800 million. But before Trump moves on to his next headline-baiting charade, let’s indulge the idea while we can.

It’s an amusing notion, isn’t it? This cartoon version of a cosmopolitan billionaire owning a sports team in a cartoon version of a fading rust-belt town? It also says a lot about the ATM machine that is the NFL; franchises almost have to try to lose money. It’s hard to imagine

Trump even feigning interest in a geographically (and thus financially) disadvantaged NBA team. Trump won’t be buying the Memphis Grizzlies.

Would NFL owners even approve Trump’s purchase of the Bills? They voted unanimously to approve Jimmy Haslam’s purchase of the Cleveland Browns, even though his truck-stop chain was under FBI investigation for ripping off the trucking companies it serves. But Trump is a publicity-hungry loudmouth whose self-promotion sometimes takes the most unseemly forms; he spent a year propagating a dim-witted conspiracy theory about President Barack Obama having been born outside the United States. The NFL prefers the strong, silent, very rich type, encouraging quiet restraint among its owners. Does that sound like Donald Trump?

Of course, Trump has owned a football team before: the New Jersey Generals of the United States Football League. The league was created in 1982 to give Americans football in the spring. It lasted three years. Trump, who was in his late 30s at the time, is usually blamed for the league’s demise. He didn’t like playing in the shadow of the NFL, so he proposed moving the USFL’s schedule to the fall. And he convinced the league to file an anti-trust lawsuit against the NFL. After the suit was basically laughed out of court, the league quickly died.

If Trump actually pursues buying the Bills - and the owners don’t stop him - he’ll be joining the monopoly he couldn’t break.

By Jonathan Mahler, A sports columnist for Bloomberg View