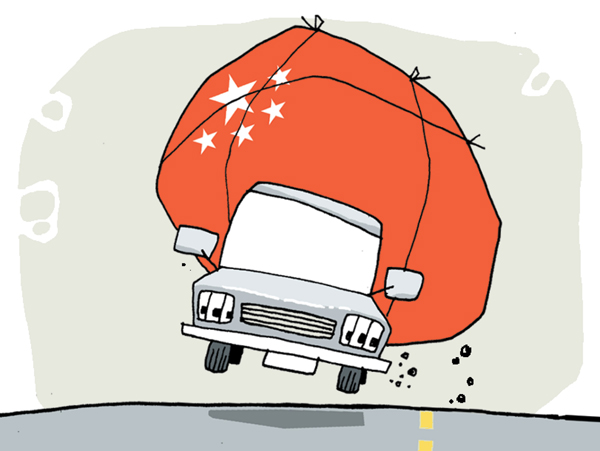 The world’s second-largest economy looks shaky. China’s growth has slowed to an annual pace of 7 percent from more than 10 percent for the past three years. If the current performance holds, the economy may not reach the government’s target of 7 percent this year. Some already sense risks percolating in the unregulated shadow banking sector that may spill over into the overall economy.

Much of the blame for the slowdown and financial instability goes to a Beijing government that has been more engrossed in keeping industrial activity and construction in full gear than tending to the real economy. In China, if data is below expectations, stock prices actually rise because investors bet the government will interfere with more stimuli to drive up the output statistics.

The administration under President Xi Jinping and Prime Minister Le Keqiang is attempting a bold economic transition under a two-pillar agenda: shifting to a domestic growth strategy and a greater market role in determining resource allocation.

The first mission is to retool the high-speed growth engine led by exports and investment to be more in tune with stable domestic demand through consumer spending. The key is not artificially stimulative spending, but a structural system that spurs a lasting cycle for consumption.

In order for the cycle to work, income distribution must be revamped. Consumers would have to be able to afford to spend through increased income and lead domestic demand, instead of companies leading through investment. Beijing set a goal to increase the share of household and wage incomes compared to national income. It has raised minimum wages by 14 percent annually over the past four years. It also announced a goal to have collective bargaining account for 80 percent of income settlements by 2015.

But the focus on consumers has dampened corporate investment spirit. The gain in fixed capital investment in the private sector fell to 21.5 percent in the first two months of the year from 30 percent in 2011. Companies that cannot sustain rising labor costs are moving to Southeast Asia. The sharp decrease in capital investment translated into an overall slowdown in the economy. The cost of leveling out wealth distribution has translated into slower growth.

During the third plenum of the Communist Party’s 13th Congress in November, China officially announced it would gradually steer the economy away from planned control by allowing a greater role of the market in distributing and applying resources. China has liberalized prices in most commercial products since the 1990s. But prices are not the only market determinant. Competition and risks also move the market. China has been keeping non-competitive companies alive for political reasons and hiding risks of excess liquidity off the radar or masked in highly protected national entities.

Beijing emphasized the “decisive role” of the market to reactivate competition and risk factors. China publicly identified companies with questionable viability and ordered restructuring of their redundant operations. They were ordered to leave the market if they cannot compete on their own. It warned it will leave high-risk shadow financial products and corporate bonds to default. Financial institutions are now on their own to answer for their mess and recklessness.

Side effects won’t be insignificant. Corporate investment withered and credit-based industry became rocky amid concerns about the financial sector. Credit squeezes occurred and borrowing costs went up. Some talk of a crisis in the making.

The slowdown and liquidity problems are the inevitable price China has to pay for its ambitious structural transition. The government cannot back down and this year will likely serve as a tipping point.

In conclusion, the economy may not meet Beijing’s goal this year. Premier Li in March said the government maintains its growth target of 7.5 percent primarily for employment. At the same time he was indicating that the government won’t artificially stimulate the economy to meet the gross domestic product goal as long as the number of jobs is not affected. China’s employment data has been stable over the past two years despite slower growth. In fact, new hiring increased. Beijing may be prepared for more modest GDP data.

The financial sector is trickier. If panic and credit runs kick in, no one can predict what might happen. Debt defaults are currently limited to private corporations. It remains to be seen if Beijing will be hands-off in allowing insolvencies of state entities. Its actions will serve as a barometer of prospects in the financial sector and Beijing’s will on reform.

Few governments can afford economic policies that are prescriptions for a slowdown and potential financial crisis. But the single-party Chinese government is willing to take the long view. The real role of the government sometimes is not to deliver immediate remedies, but long-term sustainability for the people. We, too, have been through it. South Korea has become resilient and stronger today because people cooperated during the industrialization period and financial crisis.

*The author is a research fellow of the Korea Institute of Finance.