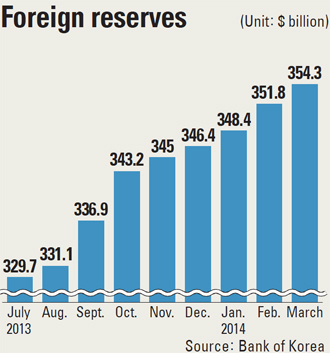 Korean foreign-exchange reserves have climbed again to reach new heights for the ninth consecutive month, according to the Bank of Korea.

Foreign reserves as of March were $354.3 billion, $2.5 billion more than the previous month, the central bank said yesterday. The nation’s foreign reserves have been continuously surpassing their all-time record since July last year when holdings amounted to $329.7 billion.

The central bank attributed the ongoing expansion of its foreign-exchange reserves largely to an increase in profits from foreign asset management.