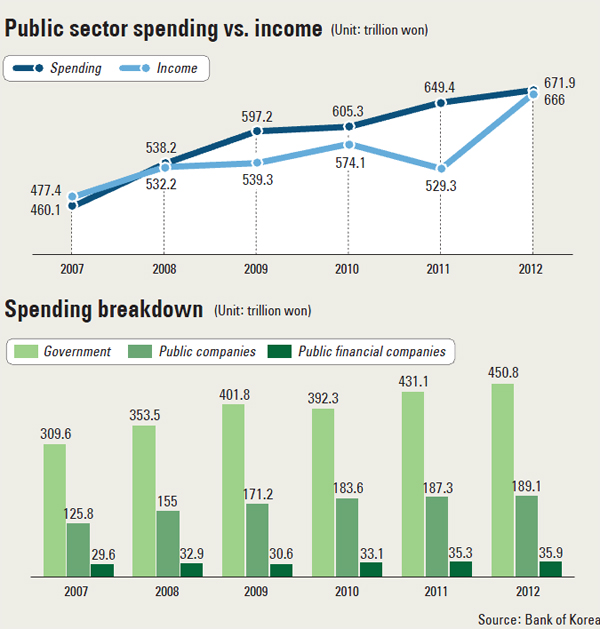 Since the global financial crisis, public sector spending has grown faster than government and public companies’ income, and even the nation’s economy.

According to a Bank of Korea study released yesterday, spending by the central government and public companies in 2007 totaled 460 trillion won ($435 billion). However, after the global crisis of 2008, spending rose steadily until it reached 672 trillion won in 2012.

During the same period, income grew at a much slower rate, increasing by only 188 trillion won.

The study is the first by the central bank to cover 5,255 public institutions, including 5,071 central and local governments and 184 public companies and state-run financial entities.

“As the public companies’ debt is huge, we needed public sector statistics that would help provide fiscal transparency,” said a BOK official.

“When spending continues to exceed income, it leads to larger debt.”

In the course of five years, overall spending by the public sector is now nearly the equivalent of half the gross domestic product (GDP).

Since the central bank began tracking data closely in 2007, public spending as a percentage of GDP was highest in 2009 (51.9 percent) as the Lee Myung-bak administration launched a 20 trillion won economic stimulus package as the global financial crisis was picking up steam.

But most alarming is how spending grew at a faster pace than the economy as a whole. As spending expanded at an average rate of 7.9 percent annually, nominal GDP growth during the same five years was 5.7 percent a year.

When breaking it down, spending by public companies grew at the fastest pace during the five years, expanding more than 33 percent from 125.8 percent in 2007 to 189.1 trillion won in 2012.

Although by total amount government spending, including local governments, was larger than that of public companies, spending grew at a slightly slower rate of 31 percent to 450.8 trillion won.

By comparison, public companies spent the least and at the smallest rate of growth. The spending by public financial companies grew 17 percent over the five years to 35.9 trillion won.

“The spending of public companies rose sharply between 2008 and 2010, when the government was making a strong push for major government-led projects,” the BOK said in a statement.

During this time, the Lee administration emphasized major infrastructure development, including the much-criticized four-rivers restoration project.

The total amount allocated by the Lee government between Dec. 29, 2008, when the first shovel hit the dirt at Nakdong River until the last day of the four-rivers project in April 2012, was 22 trillion won.

The central bank, although recognizing the large growth rate of public spending, noted that it has not yet reached critical level.

It noted that the government spending as a percentage of GDP was much lower than for other Organization for Economic Cooperation and Development member countries.

The Korean government’s total spending was equivalent to 32.7 percent of the nation’s GDP over the five-year period.

The OECD’s average was 42.4 percent. And Korea’s figure was smaller than other major economies, including the United States (39.7 percent), United Kingdom (48 percent), Germany (44.7 percent) and even Japan (43 percent).

The Park administration has demanded that the public sector take aggressive action since the second half of last year in improving its financial situation, in particular the growing level of debt.

The public sector’s overall debt, excluding that of state-run financial companies, amounted to 821.1 trillion won as of 2012.

The debt at the end of last year exceeded 900 trillion won.